Ahoy Comics Will Publish the Controversial Comic About Jesus, "Second Coming," and Make a Lot of Money Too 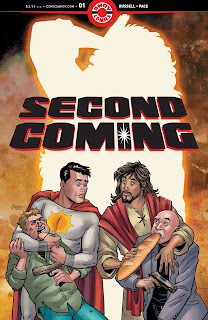 Ahoy Comics put out that, "The Wrong Earth," comic I absolutely loved, and now has a big get in the form of getting the rights to publish, "Second Coming," AKA that Vertigo comic DC panicked over and cancelled (whilst giving the rights back to the creators, thankfully). Yes, this means that the comic, "Second Coming," is indeed getting a, "Second Coming," as it seems everyone online with a fondness for puns is delighting at expressing. Writer Mark Russell and artist Richard Pace undoubtedly had plenty of interested publishers approach them after DC didn't think about how all this controversy could only help the book sell more copies even if some right-wing conservatives (who wouldn't have bought the book in the first place or probably any comics) claimed they would boycott it and DC if such a title came out.

For those unaware of all the hubbub, "Second Coming," is a satirical comic about how Jesus returns to Earth only to find himself incredibly disappointed in how people are interpreting his Gospels and seem to worship a popular super-hero named, "Sun Man," with a violent ideology counter to Jesus' message of peace. From what I have read and heard Jesus is never portrayed in a spiteful or insulting way, it is certain interpretations of Christianity that is criticized, so of course people who claim to be Christians but are in fact just hateful morons freaked-out in regards to the book. The fact these are probably the same people who think it is perfectly fine to draw and insult Mohammed yet they don't see their inherent hypocrisy in these clashing views is thought that would be hilarious if it weren't depressing. 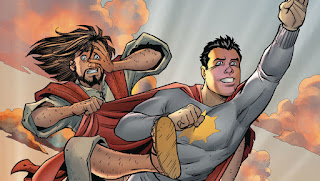 Both Russell and Pace must be ecstatic that all this press-attention has probably helped to assure the book sells a ton of copies when its released this Summer and Ahoy Comics is probably more than willing to be threatened with boycotts from people who don't even read their books in exchange for tons upon tons of cash. Again, the comic isn't even anti-Christian or anything if people look at the subject matter, with Russell saying to the New York Times how it, "...is respectful of what Christians profess to believe. It’s not as respectful as to what they actually do. It’s not a satire of Christ so much as it is a satire on how his followers of the last 2,000 years have turned his message of forgiveness and empathy into one of power and domination, which is as un-Christlike as one can possibly imagine,”so this anger from certain demographics is laughable, frankly. Russell, Pace, and Ahoy Comics will also get to laugh, all the way to the bank, so good for them.
Posted by David Charles Bitterbaum at 4:45 PM