Suppose you are a video-game company and want to get some press for your upcoming game? Perhaps to do so you decide to engage with fans. Maybe you do an AMA (ask me anything) segment on Reddit, or request tweets from folk. You know what you should not do, however? You should not do a Q&A on a website known for being so vile that even Google won't link to it due to the numerous times it was accused of having pornographic images of minors, not to mention its reputation as being a bastion of hate-speech for folk who hate black people, Jews, foreign folk, etc. Yes, I am talking about the cesspool of the internet, 8Chan, and how a video-game company known as THQ Nordic inadvertently gave it an air of legitimacy and now looks really stupid for doing this. 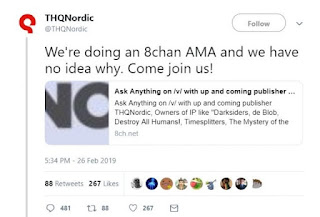 Now, people maybe have heard of 4Chan, an image board-website of sorts that is known for often having unpleasant people on it--think Comicsgate, Gamergate, Neo-Nazis, Homophobes, Xenophobes, so-called Men's Rights Activists, and so forth. Now, 4Chan is regarded as being pretty toxic and miserable, but imagine if there were people so terrible and awful that even 4Chan disliked them and banned them, basically the worst of the absolute worst. Well, those people went and created 8Chan.

8Chan apparently now at least tries to be vigilant about getting rid of anyone posting outright child porn as they don't want to be arrested or shut-down. Besides that however, anything goes. Written stuff that is full of hate, drawings of popular children's show characters who by no means are adults put into all sorts of grossly sexual situations (which is borderline in terms of legality), ranting and raving about SJWs, liberals, and so forth, it is a terrible place with no redeeming aspects. This isn't like Reddit which has some awesome communities and some atrocious ones, this is a case where if 4Chan were the dumpster of the internet, 8Chan is the stuff that was too disgusting to even be in that dumpster so it was moved into a nuclear waste site...that also caught fire. Then a video-game company trying to promote its upcoming game, "Darksiders III," dove-into this toxic sludge. The AMA went about as well as expected, full of hate-speech and questionable imagery, much to the surprise of nobody who knows anything about 8Chan.
Why did THQ Nordic have a P.R. person willingly go on 8Chan to promote their game? Apparently, "The opportunity was here and we took it." They were approached by 8Chan and instead of doing some due diligence said, "Sure, why not?" or maybe even realized the site was controversial to some degree (without full knowledge of how bad things are there) and figured doing a bit on there could get more press--not realizing just how disgusting 8Chan is. I imagine the P.R. person who was in charge of this, Philipp Brock, is praying to not get fired, with he and THQ Nordic having now engaged in extensive damage control. Although honestly, you never want your company in a position where they have to release a statement about how despite the way things look they are opposed to child porn and white supremacy. This is one big piece of shit-cake, and THQ Nordic eagerly baked it.
Posted by David Charles Bitterbaum at 5:28 PM