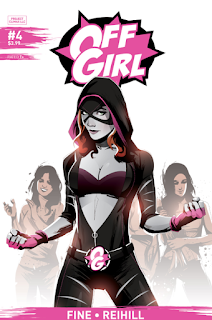 A short time ago the writer of an indie comic named Tina Fine reached-out to me over Twitter (as some comic-makers do) so as to see if I'd like to review her ongoing series. Titled, "Off Girl," she sent me four issues that featured her writing and art by Mark Reihill. The, "Hook," of comic as it were is that a young woman named Julia has a severe problem in that anytime she orgasms men in her general vicinity end-up dead. This has resulted in her taking various pills to dull her arousal so that she can at least have some degree of a sex-life and because without medication she very easily gets, "Off," as the title of the book implies.

With a concept like this the comic could go in the direction of being more of a sex-comedy or straight-up horror, and it does a pretty good job utilizing both tones. The book tries to not be overly raunchy, giving it a PG-13 kind of feel which is acceptable and maybe helps the book be marketable to more folk, but makes me wonder what Fine and Reihill might do if they decided to go in more of a hard-R direction. The earlier issues are about Julia essentially trying valiantly to avoid having an orgasm, but then the plot gets a lot more complicated as it brings in a serial killer subplot, shadowy government conspiracies, biblical prophecies, and space-aliens. Yes, aliens.

All of story-lines happening at once threatens to make the book feel overloaded with ideas but Fine writes everything in enough of a self-aware way that it manages to work for the most part. Julia knows how the idea her orgasms can kill men is pretty crazy so she doesn't struggle to shrug-off just how bizarre the world can get. Reihill's artwork is enjoyable, giving the sexy-moments a nice erotic sheen and the more terrifying bits a suitably dark and ominous feel as well. As the general plot of the comic is a sexual one I'm pleased to report Reihill does a fantastic job illustrating sexy women and men--he draws a great six-pack of abs on a gent or silky lingerie on a woman.

The comic hints at the idea of Julia using her gift/curse as a kind of super-power, but isn't really a super-hero comic so much as an interesting mixture of sex-comedy-meets-horror. Picture something in the vein of that cult-classic movie, "Club Dread," that both made fun of and indulged in horror and sex cliches and you have a pretty solid idea, but of course, "Off Girl," doesn't get as down-and-dirty as, "Club Dread," did, as I mentioned before (side-note: I actually saw, "Club Dread," with my mother in theaters when I was a teenager; the rampant sex and nudity made the experience a tad awkward). I'm perfectly alright with the book not exactly moving in a hero-direction as I greatly enjoy the mix of funny and scary it gives us--even if the many plot-points at times are a bit overwhelming.
The first four issues of, "Off Girl," are good fun, with fantastic artwork and a phenomenal mixture of sexiness, humor, and terror. Whenever it starts to feel a little too complicated with assorted twists and turns Fine's ability to always keep things grounded through her likable protagonist, Julia, makes it all work out quite well in the end. I'd rate the first four issues as overall being 4 out of 5 stars. There are a couple more issues that have come out since the first four I was provided digital copies of for the purposes of review and I know I'll be checking these later issues out seeing as how much I enjoyed what I have read! You can buy print copies via the web-store as well as purchase issues for download if you like your comics in the digital format and I would encourage you to do so as, "Off Girl," was off-tastic. Yeah, that was a bad pun, I'm sorry.
Posted by David Charles Bitterbaum at 3:09 PM