Film Friday Newsflash: James Gunn is Back at Marvel! 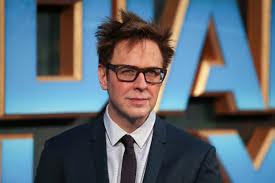 Back in July I talked about how upset I was that some hateful people who were mad at James Gunn got him fired by digging-up old (admittedly tacky) jokes Gunn had tweeted over a decade ago. These haters despised how Gunn was an outspoken opponent of Donald Trump and posted these old tweets saying, "Why could this Gunn guy say tasteless stuff but we get in trouble for it?" whilst ignoring the fact Gunn was telling dumb jokes and these idiots believe the racist, sexist, and homophobic comments they spout. Gunn had since apologized and grown as a person, but Disney freaked-out and fired him off of, "Guardians of the Galaxy 3." There was an uproar and it looked like that movie would never get made. Gunn had the last laugh getting hired by Warner Brothers/DC to write and direct a new, "Suicide Squad," movie, and that seemed to be that. As in comics how nothing ever seems to really die however (I've lost count how many times Jean Grey has returned), Gunn is back at Disney/Marvel. Say what?

That's right, Gunn (who is apparently a Saint Louis native, which is cool) has been rehired by Disney/Marvel. I guess between Gunn apologizing for his past jokes, being careful not to slam Disney/Marvel for firing him, and the fact that a lot of money stood to be lost this all resulted in Disney either (depending who you ask) politely offering him his old job back, or crawling to Gunn begging him to return. Gunn is still going to write and direct the new, "Suicide Squad," movie first and then will make, "Guardians of the Galaxy 3," so the biggest irony in all this is that the people who tried to get Gunn fired inadvertently had short-term success, but then helped him get new work before he was also rehired. This is irony so rich that if someone baked it into a cake a single bite would make my teeth hurt. God, that's a tortured metaphor, but ya'll get my point that I'm happy about this, right? I'm just sad the animal who served as the real-life model for the character Rocket Raccoon died before he could see this. I'm sure he's smiling whilst stuffing his face in that big garbage heap in the sky knowing that we're getting a, "Guardians of the Galaxy 3," after all!
Posted by David Charles Bitterbaum at 11:10 PM