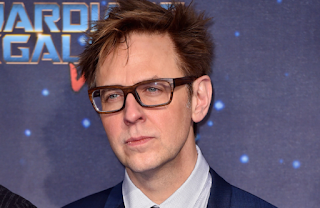 SDCC is wrapping-up and I'll have thoughts on that, but right now the biggest news to come out during the convention doesn't even involve the show directly. You see, James Gunn is a popular film director who started-out making really edgy, gross, and silly stuff for Troma, went on to do weird and enjoyable horror ("Slither,") and then made a lead to the mainstream while keeping a fun slight edge with his, "Guardians of the Galaxy," movies. Sometimes folk say a lot of the Marvel flicks seem alike except for the ones with directors who have a really strong voice such as Ryan Coogler (who directed, "Black Panther,") and the, "Guardians of the Galaxy," movies. James Gunn also was a known for his vocal distaste of President Trump and being pretty liberal. This recently resulted in some alt-right borderline neo-nazi named Mike Cernovich wanting to make things bad for Gunn. They found some jokes he Tweeted a decade ago, posted them online, and acted all upset despite their saying things ten times worse daily and not in a joking manner (Cernovich is one of those people who think all mass-shootings are Government plots, and that a pizza restaurant in Washington D.C. is a secret pedophilia ring). Anyways, the crass jokes Gunn Tweeted a decade ago resulted in Disney/Marvel Studios firing him.

Look, I read the Tweets, the jokes are dumb, tasteless, and clearly meant to be jokes. I don't find his comments about rape and molestation funny, but they read like the kind of thing I'd expect from someone at a movie studio like Troma, which prides itself on being offensive for the sake of offense. Also, they are Tweets by a much younger and immature James Gunn back when he was simply, "James Gunn, a guy who works on movies," and not, "James Gunn, the super-popular director." I'm not going to defend the jokes as anything more than dumb and puerile, but if we all have to be wary of someone who dislikes us finding our old comments we made on the internet a decade ago, then I wonder how many of us are free of any embarrassing past statements or jokes? And again, some assholes known for being hateful and terrible are the ones who did this, adding insult to injury.
Many people have come forward to defend James Gunn and say how this firing is absurd considering it all stems from a smear campaign, is based on dumb jokes from 10 years ago, and he has been nothing but professional and awesome to his cast, crew, and fans. I myself find it interesting that the very same conservatives so quick to defend Rosanne for making racist statements in the present suddenly are so offended at a liberal making jokes 10 years ago. Basically, be ready for anything you ever say online to be used against you by someone who disagrees with you, that's the era we are entering. Plus, now the question becomes if anyone will ever be able to make a, "Guardians of the Galaxy," movie nearly as great as Gunn created?
Posted by David Charles Bitterbaum at 9:00 PM