As I Have Said, Shit is Going Down at DC Coics 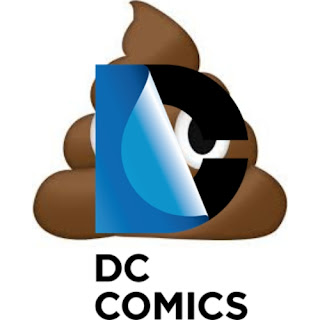 Just recently I observed that the comic-book publisher known as DC Comics had a whole lot of shit going down. People were being let-go, restructuring was clearly planned, and it seemed the company was getting more controversy-averse (for one example, see the Black Label/Batman's penis fiasco). Well, recent events only seem to further support how--as I have said--shit is going down at DC Comics.

Let's start with some less remarkable things occurring at DC. Namely, that the surprisingly-good series, "Doomsday Clock," has been delayed yet again, which isn't a shock as the artist, Gary Frank, is incredible but lacking in regards to turning-in his work speedily. Oh, and, "Batman: Damned," #3, the final issue in the series which started all the wiener-fuss, was delayed (probably to now clean-up any naughty bits in artwork)...and then all pre-orders were cancelled. Now, it is not uncommon for a heavily-delayed series to have issues cancelled to be resolicited at a later date, but maybe this signifies something else, such as possibly DC just wanting the series and the Black Label itself to quietly fade away (all the other new Black Label books also seem cancelled to maybe be solicited again too, after all). 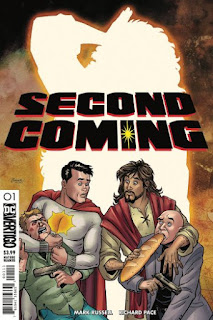 An even bigger significant occurrence illustrating that DC is scared to rock the boat is that the upcoming Vertigo comic, "Second Coming," has been cancelled, but the creative team is being given the rights so as to take it to another publisher who won't mind some controversy (basically any other publisher, in other words). For those unaware, "Second Coming," was about Jesus returning to Earth and being extremely let-down to see how people were using his teachings, as well as appearing to worship a violent super-hero named Sun-Man more than himself. It is clearly a satirical comic and seems tame compared to other stuff DC's Vertigo imprint has made before--I mean, this is the company that gave us, "Preacher." Still, there was some media attention and so-called, "Christians," complaining the comic was offensive or blasphemous, so away it goes. I mean, these are the same people who protest they should be allowed to draw Muhammad in offensive ways thanks to our nation's freedom of speech, but when has hypocrisy ever stopped the far-right in our country?

DC seems to be wanting to do comics that carefully avoid pushing too many buttons, and instead of edgier work are going to give us stuff like, "The Year of the Villain," a comic-event where villains yet again go and work to take over the world (so..."Forever Evil," but this time it is villains from the same dimension instead of another one, I guess). It isn't all bad news at DC, however, as their planned films made by their owner, Warner Brothers, have had the ones with Jared Leto's mediocre Joker potentially cancelled, so we won't have any more of that to suffer through. Hopefully he'll be a better Morbius, as Leto has shown in other roles he is a solid actor (just not a good Joker). I'd be willing to get a whole bunch of crappy Leto-Joker flicks if it meant the publishing-arm of DC would actually put out challenging and thoughtful work, but that isn't my choice to make.
Posted by David Charles Bitterbaum at 9:37 PM