Trump and the Emergency of His Own Making 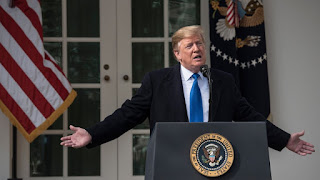 Well, it happened. I previously wrote about my concern regarding any President declaring a State of Emergency to do things the Executive Branch should not be able to do, and my worst fears have come true (something I often say in regards to this dumpster-fire of a Presidency). Donald Trump is going to declare a state of emergency--an emergency of his own making--in order to get funds to build his stupid symbolic wall (that Mexico was supposedly going to pay for), a wall taht Congress won't allow--hence the previous Government shutdown. Trump has had enough people make it clear how terrible the last shutdown made him look (e.g. like a petty loser) so he thinks this will show strength or something if goes ahead and oversteps the bounds of his Executive power...all to build a dumb wall. What happens next? Nobody is sure. This is a big Constitutional crisis. The President is doing things the President should not be able to do, and this will result in folk suing him, further questions about if the 25th amendment should be invoked so he is removed from power, and just general attempts to block his stupid efforts. You can't say Trump's Presidency has gone off the rails because this crazy-train jumped the tracks months ago and is barreling through all common-sense. Trump has made his own emergency and now is diverting Federal funds for it. Should such a thing stand it sets a dangerous precedent for other mayhem Trump could try to cause with more future emergency declarations, as well as what later Presidents could attempt in regards to basically disregarding our Nation's laws--assuming this all doesn't end in nuclear apocalypse and Trump becomes the last President (America, it had a good run).

These upcoming days and weeks are going to be pivotal in determining if Trump will be allowed to run roughshod over America's foundational laws, or if his temper-tantrums will be put to a stop now that Democrats at least have some power again--lord knows his own party is so used to kissing his ass they ain't gonna do a thing. The ultimate irony in this of course would be if Trump gets his moronic efforts approved by the Supreme Court our next President, who willy very likely be a Democrat after what the GOP has done lately, will then have the right to push through all kinds of Progressive ideas even if Republicans protest. After all, if it was good enough for Trump why not have it be good enough for our future President, Ms. Alexandria Ocasio-Cortez? Seriously, she is a breath of fresh-air among all these other ancient and corrupt politicians. Anyways, to summarize my article: Trump created an emergency to do what he wants, it is madness as usual, America is doomed. On the plus side, all that Valentine's Day chocolate that didn't sell yet is now heavily discounted, so that's nice.
Posted by David Charles Bitterbaum at 9:52 PM