Our Country Has Shut-Down Over a Symbolic Wall 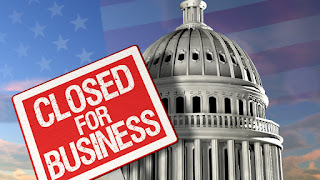 It is an hour past Midnight on the East Coast and a bit past Midnight here as I type this. America's Federal government has begun shutting-down a bunch of aspects due to not having a workable budget. It is almost Christmas and many Government employees will not know when their next paycheck is coming...so Merry Christmas. Why is it our Nation failed to pass a budget? It is becuse the Senate would not agree to giving our shitty excuse for a President, Donald Trump, 5 billion dollars towards his wall on the United States and Mexico border. A wall that, mind you, would basically be mostly symbolic and do little to keep out people getting into the country in other spots. A wall that also symbolizes all of Trump's nationalist and xenophobic bluster. A wall rooted in his talk of the terrible rapists, criminals, and monsters to the south of the nation who with their brown skin and foreign language somehow threaten the jobs and safety of Americans--well, white Americans, because let's be honest about who he is doing these claims for the satisfaction of--white Americans terrified of anyone the slightest bit different than them.

Never us mind how Trump kept claiming that somehow Mexico would pay for this wall, he wants his 5 billion dollars and even if the Senate was willing to give him any money it apparently is not enough, as the House of Representatives was okay with pissing away 5 billion that could be spent on almost anything else, but the Senate said, "This is stupid." Now, it is Christmas and America itself doesn't have a budget. Over a wall. A symbolic wall. I've said it before, and I'll say it again, Fuck Donald Trump, and his supporters have reaped what they sowed.
Posted by David Charles Bitterbaum at 12:27 AM