I'm Sick of Any Current and Possible Covers of Toto's song, "Africa." 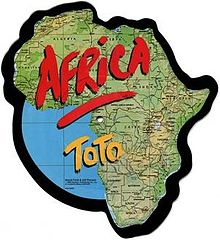 12/16/18 Update: In an interesting twist, "Saturday Night Live," touched upon this subject and the legacy of Weezer as well last night.

You know what was fun at first then got way overplayed on the radio, at parties, basically anywhere? The cover version of, "Africa," that Weezer did. I am a fan of Weezer, they have some solid songs, and that cover of, "Africa," was funny in how it came about via a fan pestering them on Twitter. It also is a solid cover. I am sick and tired of hearing it everywhere all the time, however. Plus, I was worried it might inspire other people to try and cover the song in hopes they would get some publicity, and sure enough now Pitbull of all people has a pseudo-cover of the song he did for the, "Aquaman," soundtrack. I have listened to it and you can if you want to put yourself through auditory pain:

This needs to stop. Before anyone else gets the bright idea to do a cover of, "Africa," they need to be told it is a horrible idea. It was a bit clever and kind of funny when Weezer did  it, but now I (and I imagine others) are sick of it being blared all the time and if Pitbull thinks he can offer his own take on the song it is only so long before other artists try. I have zero desire to hear Nicki Minaj spitting mediocre verses about how delicious her vagina is over, "Africa," and even though I've lately been giving Taylor Swift a pass, if she dares think a weird country-ballad version of, "Africa," is worth doing I will probably start screaming until I am hoarse. I am begging everyone in the world, please let  just Toto and maybe Weezer (once the song is less overplayed) do, "Africa," and find some other random song to cover for fun. I mean, it's the holiday season and, "Last Christmas," by Wham! is a great song I always enjoy covers of, maybe people should do that, please?
Posted by David Charles Bitterbaum at 10:29 PM