The Saint Louis County Library Agreed with my Suggestion That They Ought to Buy a, "Black Lightning," Comic Collection! 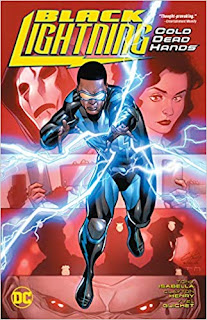 I often write about my fondness for my local library. Well, the other day I was talking with an employee about some comics I thought they should carry and she told me how on the Saint Louis County Library website you can, "Suggest a purchase." I went to the site and sure enough there was a link to do just that. I filled-out a form with the title of the comic, the creators, the ISBN, and my thoughts on why it should be added to the system. I suggested the library buy, "Black Lightning: Cold Dead Hands," as with the success of the television show (which the library did have copies of season 1 available to check-out) it made sense people would want to read stories about the character. I figured that a recent mini-series written by one Black Lightning's co-creators (Tony Isabella) that was accessible to readers new to the character could make a great addition to the library system.

I submitted my proposal a few days ago and quite quickly heard-back from the library that they agreed with me! They will be buying copies of, "Black Lightning: Cold Dead Hands," so that more people can be introduced to the character of Black Lightning! I just want to thank Tony Isabella and Trevor Von Eeden for creating this awesome character and now I don't have to loan people my copy of the book so that they can enjoy it, I can just tell them to visit the library, and then if they like what they read to buy more works by Isabella and Eeden!
Posted by David Charles Bitterbaum at 6:32 PM