A Complicated Relationship with Judaism, Struggles with Mental Illness, and Moon Knight 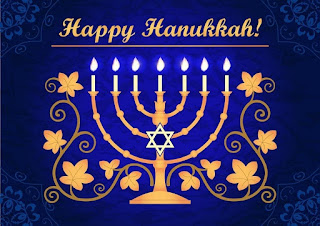 The first night of Hanukkah was yesterday. This resulted in me thinking about Moon Knight, because why not? The thing is, the more I thought about how much I love the character (under most writers and artists' pens) the more I started to realize why I identify with Marc Spector AKA Moon Knight so much. There are basically two big reasons that I'll go into and in the process will be making a pretty personal post, so if you prefer only reading my blog when I'm just riffing on culture and being a smart-ass this may be a bit of a swerve for you as this is one of those rarer serious articles--just so you're warned.

A Complicated Relationship with Judaism 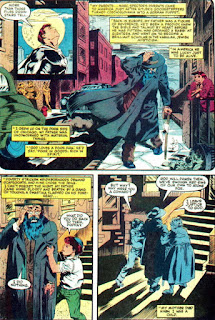 Marc Spector was raised Jewish. His Father was a Rabbi, in fact. He would most likely still identify as culturally Jewish, but as his origin goes, things get complicated. He was a mercenary for hire who turned on his team when ordered to kill innocent archaeologists, getting shot by his crew he refused to follow the murderous orders of. He died at the foot of a statue of the Egyptian God of the Moon, Khonsu. He came back to life, and from that point adopted the heroic identity of, "Moon Knight," serving as an avatar for the Egyptian God. A Jew, basically serving a powerful Egyptian without question. It is loaded with weird metaphors and the comic has often touched upon this, with a myraid of Spector's friends, enemies, and his own pysche remarking how he has arguably both thrown-off his Judaism to serve an Egyptian God and at the same time is like his ancestors who were slaves to Egyptian powers.

Spector rarely seems to observe Jewish holidays, and the other alter-egos he has assumed in his effort to fight crime don't seem interested in religion at all, be they Jake Lockely, his cab-driver identity he uses to stay close to the streets or Steven Grant, a persona Spector created with his accumulated wealth to give cover to his creation of all kinds of expensive gadgets for Moon Knight and the mansion they are housed in. Spector has deep Jewish roots, but he's terrible about observing his faith, and quite possibly would be disappointing a number of people in appearing to shrug off his religion and dress-up as a hero fighting for an Egyptian God. Now, I am not a vigilante who dresses-up in a symbolic fashion for a God of another faith, but I am pretty non-practicing when it comes to my Judaism. There were times I was quite observant in my life; I had my Bar-Mitzvah at age 13, and on very rare occasions I even tried to keep somewhat kosher (it didn't stick, bacon is too delicious). As I got older however, I became less and less observant of my faith, morphing into someone essentially culturally Jewish but not practicing my faith much at all. 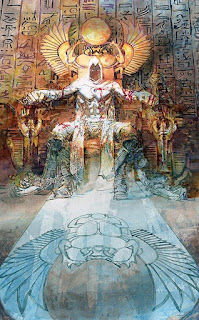 Before our son, Clarkson, was born, Samii and I agreed we would not try to force either of our religions upon him. Samii is Christian, but not overly-religious by any means, and as I have said, I'm Jewish, but terrible at practicing my religion. We agreed we wanted our son to be made aware of his religious heritage as he grew however, understanding his background as someone with both a Christian and Jewish lineage. I don't expect my son to grow-up and be a practicing Jew, but I want him aware of where he came from. He can mature and choose to believe whatever he wants, and I'll support him no matter what. I don't want him to worry he is letting people down, as Marc Spector has been told numerous times in regards to his extremely complicated relationship with Judaism.

To the immense credit of my parents and my Bubbie, they have never made me feel bad about how observant I am or am not in regards to my Judaism. I have reached out to my Bubbie on a number of occasions as she is Clarkson's sole great-grandparent who is still alive on my side of the family, and if you were to picture the definition of, "Wise Jewish Grandmother," she would fit it to T. She has often offered advice (but only when I've requested it) about how I can work to help make Clarkson aware of his heritage, as even if I have struggled to be particularly observant, I know the importance of making my son aware of his rich background. Marc Spector has a very complicated relationship with Judaism, and I do as well to some extent, but thankfully I have a support network, something he lacks. Which actually brings me to my next element about Marc Spector I identify with, mental illness.

Struggles with Mental Illness
Marc Spector has mental illness. No matter who is writing him, that is acknowledged. Some writers have portrayed his adopting various personas as a multiple identity disorder, others have written him as fully aware he is playing a role, but putting that aside, the comics about Marc Spector have a number of times addressed how he clearly has issues with depression, anxiety, and anger. He has pushed away those who care about him most due to lashing out at them for simply trying to help him or offer support. He can at times be self-destructive, not stopping to rest and instead trying to keep his negative feelings away through non-stop crime-fighting, refusing to take time for his own personal or social health. When he gets in fights it is known his style is that of simply taking a punch and then hitting back, not bothering to dodge, but instead seeking pain for a thrill. Regardless of the kind of psyche one needs to wear an elaborate costume and fight crime, Marc Spector clearly has a number of mental health issues.

I do not have multiple personality disorder. I have never self-harmed (intentionally at least, there are times I've nearly sliced my fingers off trying to cut a sandwich). I have never wanted to hurt others without a reason. I do however have depression and anxiety. In 7th grade I began occasionally having these overwhelming feelings of doom. I would be perfectly fine then suddenly get the sensation that everything was terrible, the world was awful, and I could suddenly just drop-dead. I spoke with counselors and it became clear these were panic attacks. By the end of 8th grade I had begun having depressive episodes as well where I would want to simply do nothing and push away anyone who tried to offer support, or would take the opposite tact and become hyper-focused on working on assorted tasks (homework, playing a video-game, reading something) as if doing something else long enough would make the depression hopefully eventually go away if I ignored it.
Moping around didn't help my depression or anxiety however, and trying to engage in random activities almost to a compulsive degree was of little assistance as well. Eventually through a mixture of counseling, antidepressants, and working on developing coping techniques I got to a much better place in life. I still struggle with anxiety and depression, but to a much smaller degree than Junior High through my early College years. Again, a strong support system in the form of parents, friends, and now my understanding and caring wife has helped me immensely. By having people who refuse to be ignored or pushed away when you tell them to scram (but actually need them most) in your life that is helpful to a degree that cannot be overstated.

Marc Spector has people who care about him, but when he is at his lowest he can be positively toxic. His on-again-off-again girlfriend Marlene tries her hardest but can only do so much before Spector forces her away. Spector has at times seen doctors for assistance with his problems but usually ends-up disregarding any helpful advice, instead perpetuating his cycle of self-destructive tendencies. It is telling that despite occasionally working with super-hero teams, Moon Knight often chooses to work alone, and there have been occasions he could've had help from other heroes who have their own problems and can relate, but instead rejected any kind of support network. Should my son ever start having his own mental health concerns as he grows-up I want him to know that his mother and I are there for him with no judgement, only support and love. 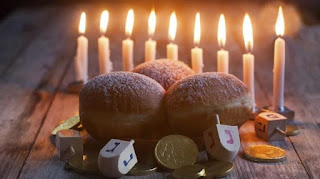 I am not a super-hero like Moon Knight. I do not have as complicated a relationship with Judaism as Moon Knight does either.  Also, I do not have nearly as many mental illness issues as Moon Knight. All of that said, when I look this hero and his civilian-self of Marc Spector I identify with enough of the character that a number of elements within him really speak to me. He has struggled with many of the issues that I have, just to a highly exaggerated degree. As the 2nd night of Hanukkah nears I continue to have a relationship with my religion that is always changing just as my relationship with my own mental health is always evolving. I am a parent to a child who will undoubtedly have his own views on Judaism (and religion in general) and who may face mental health challenges a bit like mine or completely unique to him. No matter what however, my son will have a support network there for him to ensure he's happy, healthy, and comfortable with his beliefs. I can only hope that in some fictional universe Marc Spector has such support too, and while a well-adjusted Moon Knight would possibly make for boring reading, it is a nice thing to imagine.
Posted by David Charles Bitterbaum at 5:10 PM