I Had a Wonderful Time at STL Comics' Mirco Con Yesterday! 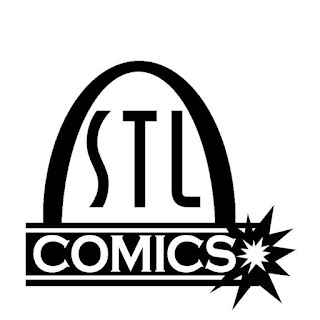 It is Sunday evening and I'm still thinking about the stellar time I had at the latest Micro Con held by STL Comics yesterday. Between the great guests and large number of comic-vendors I had the level of fun one would expect from a big ol' convention, but thanks to the free parking and small $3 entry fee folk pay (kids 10 and under are free) it had the excitement of a big convention but didn't break the bank like one.

When I first arrived I enjoyed chatting with creators Lorenzo Lizana and David Gorden, who had tables next to each other. Mr. Lizana told me about an upcoming sci-fi comic he was working on titled, "Regulators," that will have a sci-fi space-pulp vibe meets, "The A-Team," with a strong sense of adventure and the tongue-in-cheek style of those classic 1980's episodes of the show. Mr. Gorden was selling his latest comic he wrote and illustrated, "Kwame Hightower and the Man With No Name." Both were a delight to speak with about comics (as always) and they were kind enough to pose for a quick photo: 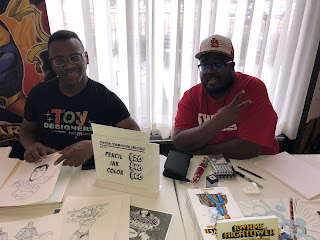 After I stopped to meet and talk with Kyle Strahm about how I've enjoyed his work on, "Spread," as well as other cool comics, I began examining the goods on sale. A wide range of comic-vendors were present, from those selling more expensive golden and silver age books, to retailers with plenty of modern stuff, and of course a number of people had my personal favorite thing to root through--dollar bins. I bought some cool cheesecake-style comics from Cabal Books and got all excited just looking at an old copy of Moon Knight's first appearance in, "Werewolf by Night," #32 which Wayne Kent Comics had for sale in addition to other stellar reads. Speaking of Moon Knight, I was able to trade some of my stuff for a handful of awesome, "Moon Knight," books in addition to some other stuff from a vendor based in Cape Girardeau, Shane Lodi. They are absolutely gorgeous: 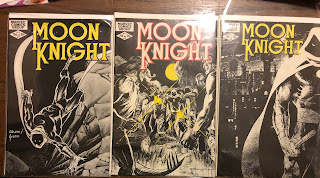 Yesterday's Micro Con was just plain fantastic, and I appreciate STL Comics for always putting on such great comic-shows. I'm excited for their upcoming, "Geeky Extravaganza," which will be an event focused on not just comics, but also incorporate toys, crafts, gaming, and other fun stuff. That happens on January 26th, 2019, at the Manhattan Antique Marketplace (10431 Saint Charles Rock Road, Saint Ann, Missouri 63074) and you already know if I'm able to attend I'll be there!
Posted by David Charles Bitterbaum at 10:52 PM