By the Way, About Those Big Marvel Teasers... 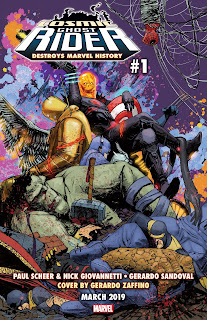 A little under a week ago I talked about how Marvel was publishing these teasers about how everything we knew about the Marvel Universe was apparently wrong. I wondered if it was some big event that would pretend to change things before turning them back, or would be some minor alterations. Apparently it wasn't even anything that ambitious. There is going to be a new Cosmic Ghost Rider mini-series where he, "Destroys Marvel History." Now, the Cosmic Ghost Rider is himself a somewhat out-of-continuity creation--a version of Frank Castle/the Punisher who turned into a space-faring Spirit of Vengeance from a possible future timeline (he first appeared via Donny Cates and Geoff Shaw in the, "Thanos," series). Therefore, he is a walking alternate-universe character who can pop-up in the regular Marvel-Universe but can do plenty of things to alter space and time that don't really, "Count." The upcoming comic is therefore a mini-series that will have the Cosmic Ghost Rider doing all kinds of things that either:

B. Supposedly did happen but somehow nobody remembers.

I don't mind this at all, the last Cosmic Ghost Rider mini-series that recently came out was relatively well-written and had some amazing artwork from Dylan Burnett. I imagine the next mini-series with an assortment of creators (Paul Scheer, Nick Giovannetti, and Gerado Sandoval) will be fun, but I am surprised Marvel was hyping this up so much as a comic with world-shattering revelations.
Posted by David Charles Bitterbaum at 10:03 PM