A Comic Was Solicited With a Writer I Adore...and an Artist I Loathe 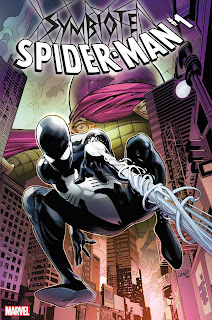 I am a big fan of the comic-books by Peter David. His run on, "X-Factor" from the early 2000's to the 2010's was among my favorite comic-runs ever. Even if he has at times said some tone-deaf things, he apologizes for them and grows as a person who I enjoy reading his thoughts online along with his stellar comic-work. Therefore, in latest Marvel solicitations in this month's edition of, "Previews," I was ecstatic to see he was going to be writing a Spider-Man mini-series set during the time Peter Parker had the black suit (which turned-out to be a Symbiote, and once he cast it off turned into fan-favorite character, Venom). Titled, "Symbiote Spider-Man," I was ready to tell my comic-shop to put me down for all the issues...and then I saw who the artist was. The artist is (insert a big sigh sound effect here) Greg Land.

Greg Land is of course notable for how instead of doing much actual artwork he just traces a lot of stuff and the finished product looks like a crappy pin-up as opposed to telling a story. He'll use other's art as well as pictures to create his supposed work. Perhaps he will trace a photo from a magazine, a sporting event, or (quite often it seems) porn, as all of his women are posed suggestively and usually have faces shaped as if they are in pure ecstasy even if they're supposed to be yelling or angry. Greg Land is just terrible and the last time I suffered through his artwork for a comic it was when Al Ewing was absolutely killing it on, "Mighty Avengers," and Greg Land was killing...almost all of my enjoyment of the book. I  honestly don't think I can take any more of Land's atrocious excuse for art and for that reason I'm going to sit-out, "Symbiote Spider-Man," just so I can keep my eyes from burning in pain upon glimpsing Land's work.
Posted by David Charles Bitterbaum at 11:25 PM