My Life and the Amazing Comic "X-Factor".

Numerous times on this blog I've talked about the just-ended "X-Factor" which spent a number of years in circulation, getting up to issue #50 before reverting to "Legacy"-styled numbering as #200 and ran up until ending last week at issue #262. Oh, and there was an excellent mini-series titled, "Madrox" that led into the said character forming his detective agency, of course named X-Factor.

Peter David wrote this series the entire time, through Marvel's countless editorial events that would sometimes wrest characters from his control (such as when Rahne left the book for a bit to be in an "X-Force" comic), or even when suffering a stroke that happened toward the end of the comic's run--and which in the final issue he insists has nothing to do with the book ending as there were already plans for this title to conclude. I've loved "X-Factor" so very much, because it has been with me for many years of my life that were full of various experiences, but in which "X-Factor" remained a constant. If I may be a bit self-indulgent I will illustrate why this book has meant so much to me...

The first issue of this X-Factor series I ever read was issue #6. Shown here: 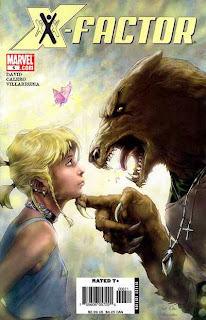 I remember quite clearly how I stumbled across it, as this book quickly became my favorite. It was sitting on an ill-kept comics' spinner-rack at a Borders in the mall at Ithaca, NY. That's right, this goes all the way back to when Borders had not yet become defunct. Anyways, I was in high school still and didn't frequent any comic shops so much as occasionally pick up a trade at bookstores or a single issue of comics that looked neat. I remembered Layla Miller being in the "House of M" trade I had just read and wondered what had happened to her, so when I saw the weird cover to issue #6 with a person who looked like Layla and a strange wolf-monster I eagerly picked the book up.

I immediately fell in love with Madrox, Rahne (whom I learned was the wolf-monster) Guido, Monet, and everyone else. I started picking up the comic anytime I saw the new issue on newsstands, and when I went away to college I finally got around to  ordering the "Madrox" mini-series on Amazon and had it delivered to my tiny college mailbox where it was roughly forced into mail-crevice yet remarkably was unharmed thanks to good packaging.

I kept reading the series and adoring it, from all the twists and turns to the amazing characterization, I kept following the book as I graduated college, did AmeriCorps, moved out to Saint Louis, and saw the characters grow and develop just as I did. Madrox and Layla got married (she became much older when she traveled through time so it wasn't that weird), Guido went from a lovable lunk to the lord of Hell, Rictor came out as gay and reunited with his love, Shatterstar. Quicksilver went in and out of the book between his various adventures in other titles and each time he appeared was a bit more stable and well-adjusted, and the fascinatingly evil Tryp was there at the start of the series and fittingly appeared in the very last issue too. As I went from high school, to college, to AmeriCorps, to working towards my Master's Degree, and graduating with it shortly ago, I always could enjoy the comic, "X-Factor" as my life kept changing--sometimes for worse, but much often for better.
Now we are at a point where "X-Factor" has sadly come to a close, but clearly isn't truly done with something else in the making that will most likely answer a variety of the remaining questions this series left. I've gone from a single high-school student to a holder of a Master's Degree and living with the love of my life (plus two adorable cats), and as corny as it sounds, "X-Factor" was always there for me, through the good and the bad. Sometimes folk will ask why I read comics, generally not in a mean way, but out of curiosity as with the booming business of comic-book (and specifically super-hero) movies there is more interest in the form. The best answer I can usually give is that through the long-form storytelling I'm able to have those characters there with me, remaining a constant yet also evolving as my life changes too. Sort of the same reason some people like a particular series of books, or certain television shows. It is comforting to have that piece of entertainment there growing and changing with you, yet as I said, being a constant in that it is always there.

"X-Factor" and the "Madrox" mini-series that led into it were amazing books, and I'll miss this version of the series immensely. I am thankful for the all the time that this version of "X-Factor" did exist, and was able to be with me, growing and changing in new and interesting ways, just as I suppose I did. As I enter the next stage of my life, working and such, it'll be interesting to see "X-Factor" do the same. I look forward to it--both my changes and those of "X-Factor"!

Posted by David Charles Bitterbaum at 11:10 AM