Grand Theft Auto V, Misogyny, and the Question of Satire 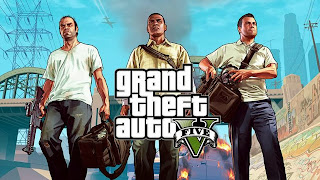 The thing is, while playing GTA V and reading various articles about it, some things started to bug me just as they were bugging other people. The main things were the way female characters were treated in the game, and the overall defense of the game being satire so its okay. I decided I would delve into these feelings in a probably-too-long post that may or may not prove interesting to anyone reading.

Money-making machine...
Grand Theft Auto V has been out for a little bit and I suppose at least some people have played it considering it has made 1 billion dollars in sales. Clearly, the game is a money-making machine and you don't really need me to review the game--you either are going to buy it at some point, have bought it, or don't care for the type of game it is (or just don't play games at all) and will be "sitting out" owning it. I'll preface everything else I'm going to say with the fact that GTA V is a good game, a really good game--there is no question. The world you live in feels so developed and organic it is a little creepy how you can spend a minute just staring at the amazing architecture that makes up the game, from its pedestrian characters, to buildings, music, etc. The game has been getting a fair amount of critical press however, and for things beyond the usual, "This game is too violent/games are evil." Yes, GTA V is causing a bit of a stir due to a question that sounds simple but is in fact extremely complicated. That question would be: Is it misogynist?

The worst aspects of masculinity put into a blender...
The three main characters of Grand Theft Auto V are all male, and flawed in different ways--some of them more than others. The game's developer, Rockstar, has said this is because the game is about reflecting masculinity(and clearly from the way the game plays out its downfalls). Do the characters reflect this concept however? I suppose to a point they do.

Franklin is probably the most genuinely likable of the characters, a young man trying to do more than just live in the "bad" part of town wasting life away. Michael is a pretty bad man but has enough insight about himself and the choices he's made to at least recognize he is bad, and doesn't like the reflection he sees in the mirror. Then we have Trevor, a grade-a monster whose mood can swing from mellow to violent in the span of a few seconds. Trevor doesn't blink at the idea of murdering anyone who stands in his way, having sex with whomever he wants regardless of their relationship status, and basically is less a man and more a display of pure id. Trevor is all the worst aspects of masculinity put into a blender and then baked until you get this horrible, horrible person. I suppose the game reflects masculinity and its issues to a degree, but what about the role of female characters, or femininity in general?

Women shown as little more than overly-emotional liars...
Grand Theft Auto V lacks any significant female character from what I've seen so far playing it and from reading about the game. At least, it lacks any significant female character who isn't portrayed in a negative light as either sexually promiscuous, or a raging bitch. The only character in the game with two X chromosomes that I have encountered (hours into the game) who isn't shown as horrible spoke maybe 3 lines to me. She was a member of my gang when we pulled off a jewelry heist and served as the hacker. The lines were telling us how long we had before the alarm went off, offering to help shoot the police pursuing us, and saying at the end of the job how she felt it went well. Other than her, everyone was a prostitute, drug addict, cheating wife, spoiled daughter, mean and over-sexed aunt, or some other stereotype of women that makes them look like little more than overly-emotional liars. Men may be shown as pretty bad people in GTA V, but at least some of them are a little bit more good than bad, and no woman seems to get the same slight redemption in GTA V, any female is just a horrible shrew.

It doesn't help that a lot of the time when someone has questioned the game's portrayal of females, that fans of the game have spewed forth pure hatred online, especially if the person pointing out the gender issues is a female. Putting aside the fans who have made violent threats to anyone that dares question GTA V, there are those who, in a thankfully calm manner, point out, "Hey, GTA V may portray women horribly, but aren't men given the same treatment, you know, isn't the whole thing supposed to make you uncomfortable with its misogyny and violence? After all, everyone in the game is a terrible person!" To this I can respond: Ah, the old, "Its supposed to be politically incorrect/it's satire/it's social commentary/subversive!" argument.

Satire can be silly, but just because you're silly that doesn't mean you're satire...
If I may quote an article, "Satire doesn't go far enough to cover lazy writing and thinking." This basically means that yes, Grand Theft Auto V skewers society, but is it really satire, especially where the female characters are concerned? GTA V has many funny moments of parody, and it did make me laugh, but I would agree it is really just attacking everything it can think of, and most of those thoughts seem to be easy targets (e.g. celebrities are fake, America is obsessed with reality television). Also,  wouldn't most agree it isn't really satire to just show all women as terrible people without having some sort of point to your portrayal? Satire often has a sharp, biting edge, and GTA V may make me giggle with its "Republican Space Rangers", but if we're honest the game really is just taking easy pot-shots at culture. Having a social network called "Life Invader" is about as edgy as a comedian with a day-time talk show making the same observation about how social networking sites such as Facebook, *GASP*, invade our privacy!
If your message is that nothing is worth taking seriously, then do you really have a point that you are trying to make besides that you kinda-sorta have no point? Satire can be silly, but just because you're silly that doesn't mean you're satire, it just shows how you're trying to make people laugh with dirty words and jokes about easy things to make fun of--"People on the West Coast like to smoke weed, how funny!" GTA V may parody culture, but I've seen folk agree that it isn't subversive or really all that satricial, at least not at the level of some other games out there today that definitely are making a point beyond, "Boy, our culture sure can be stupid, can't it?"

It is kind of odd to think that Grand Theft Auto V isn't that satirical, because it definitely does have a dark edge, its just that edge tends to be lacking in humor and instead be overloaded with cynicism and anger. Its a bit of a shame, as the game definitely has opportunities to make truly ballsy comments on society, and even comes close a few times. Some would argue, for example, that a scene which occurs in the game and involves torture actually does qualify as satire, with its mix of barbarism and a hint of dark comedy (or at least the scene is making a statement), however a few moments here and there of insight in a game that can last more than 100 hours does not a piece of satire make.

At least a lot of fun was had...
Grand Theft Auto V is a game with an amazing world. The city of Los Santos, the countryside of Blaine County, and the way it feels like the player is in a living, breathing world is just incredible. There are also plenty of humorous elements in GTA V, and lots of stuff to do that is a blast, from parachuting and off-road racing to more illicit activities such as robbing armored trucks or the game's titular activity of stealing cars.
All of this goes to show that even if GTA V isn't satire, and suffers some due to its casual misogyny, it is enjoyable as a piece of gaming entertainment. As another article I enjoyed points out, GTA V isn't the horrible threat to society's morality as some like to make the game out to be, or a piece of deep social commentary, it's just fun. While I do wish there were more of a message in a game that has such a big platform to make a statement (seriously, a billion in sales?), at least at lot of fun was had by those who played it, and is being had by those still in the process of enjoying the game. I do hope the creators behind GTA V make a greater effort to have some real statements behind the next GTA game and don't just rely on violence, swearing, and lame jokes.

Maybe if they try to be deeper and make even more money, such as two billion in sales, that'll illustrate we as video-gamers are ready for something more intricate and deep from Rockstar, such as their other recent and arguably more plot-driven games Red Dead Redemption or Max Payne 3. I want a game that makes me think while I'm having fun, not one where one of the smarter jokes is how the stock market is called the BAWSAQ. Although, that is pretty funny even if it is horribly juvenile.