Let's Talk Some More About DC's 3-D Covers, and Novelty Covers in General.

We've gone through two weeks of DC's 3-D cover madness and I've seen different shops respond to it in a variety of ways. From stores I have checked out I've seen some places taking the covers and marking them up immensely and others just selling the 3-D-adorned comics for cover price, i.e. $3.99 if you want 3-D and $2.99 if you want the covers without it. I've written about what seemed good, bad, and ugly in regards to Villain's Month/Forever Evil and how horrendous all this allocation business is. What do I think of the 3-D covers themselves now that I've seen them though? One word, "Eh".

I've been told everything about how the covers looked from that the 3-D wasn't all that impressive to it was amazing (well, maybe I heard one random guy say he thought it was cool, "amazing" is over-stating it). I've seen them in person now and...they are neat, I guess? If I look at the covers just right AKA head-on, and move the comic around a little bit then I definitely see some wiggling-around of the image as if it were popping-out at me. 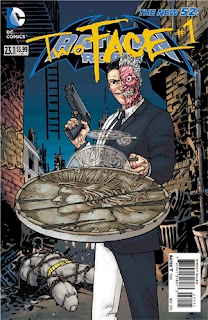 It's not a failure as a special-effect, but is it a gimmick that is worth one whole extra dollar? I honestly can't answer that, because I don't know if in the future those copies of "Batman and Robin #23.1/Two-Face #1" that are 3-D will actually be worth the many extra dollars one shop I went by was charging, or if they'll be sitting in the dollar bin with the 3-D material on the cover worth more than the comic itself.

This all leads to the question of if this Villain's Month 3-D cover business is going to be a success or more of a fiasco. From the little data that's in via word-of-mouth from retailers or other random folk, so far things have been going pretty well, with fans perhaps more interested in the event than the silly covers, but plenty of "speculators" are going to stores too and snatching-up all the 3-D covers they can, so who knows how inflated sales are due to speculation.

I myself hope that Villain's Month goes well, but not too well. I say this because if Villain's Month is a smashing success we may see DC and other companies fiddling around with other sorts of designs and random gimmicks. Should you think I'm being paranoid I would like to point at a post about how Marvel is bringing back the acetate cover for the upcoming "Origin II" comic. I suppose a mini-series that continues telling Wolverine's back-story deserves something snazzy, but I thought all that business of covers with the raised-up-off-the-page images had passed. 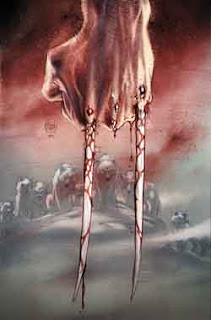 As I talked about in my first-ever "Tales from the Dollar Bin" post about the old "X-Force" comic, poly-bagging has been making a return, so between that, variant covers, and now these other gimmicks it is as if the 1990's are here again. You know, the part in history right before that huge crash that occurred in the comic-book market. Clearly I don't want that to happen again because it would be tragic, but I wonder if yet again the comic-book industry is making its way toward such a thing.

As it is, I don't really mind novelty covers, as long as they aren't made artificially rare with a sort of manufactured "scarcity" that makes it harder for me to read the comics I like. Plus, suddenly if they are more expensive due to all the bells and whistles, that is a major pain too. I don't know what is going to happen with novelty and variant covers, but sooner than later something's gotta give. I just wonder what exactly it is that will be "giving", be it the market due to an over-saturation of gimmick covers, fans giving up on all the novelty-covers, or something else. We shall see.
Posted by David Charles Bitterbaum at 10:20 PM