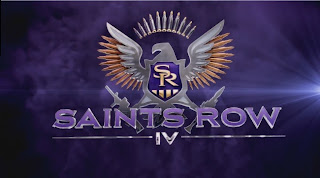 I've been a fan of the "Saints Row" series of games for some time. I have an older post where I ramble on about why the first game's final three missions made the game one of my favorites. I of course also enjoyed the sequel, "Saints Row 2," and "Saints Row: The Third" was great fun, but I hadn't felt that same magic, the same desire to do every single activity or mini-mission in the game since the first "Saints Row". At least, I until this version, number four.

The "Saints Row" series has slowly gotten crazier and crazier, to a point where while in the first game you were a mostly-mute member of a street-gang, now in the fourth game you are the President of the United States and making awesome quips while fighting off a gigantic alien invasion. Oh, and you're in a computer simulation of the city of Steelport from the 3rd game and by messing with the system you have all sorts of super-powers. Yes, it is as awesome as it sounds.
If you've played "Saints Row" since the first game it does still follow a continuity, with references to past events and characters, but this game is also its own beast of majesty. From the opening mission with its "Call of Duty: Modern Warfare" feel, to jumping and gliding around the city, everything about the game from its writing to the act of playing is a great time. I've been loving the main missions and side-missions, along with all the little mini-games and activities that involve using my super-powers in creative ways or fighting off various aliens serving as the security program/law enforcement for the virtual system.

The internet seems to love the game too, from my friends over at Caffeineforge to Joystiq with their 5-star review. Plus it has been pointed out the game is actually pretty big on sexual and gender equality. Your character can be a man, a woman, a man with a woman's voice, or a woman with a man's voice, and your crew treats them the same no matter what. In an homage/parody of the "Mass Effect" series you also can romance your fellow Saints, be they male or female, so that's quite cool.
I haven't even beaten the main story in "Saints Row IV" so I don't think it would be appropriate to review it, but even at this slightly early state of my playing I can say this is one dynamite game. I know Grand Theft Auto 5 comes out tomorrow, and you can bet I'll be playing that too, so I suppose I'm going to be needing to do some juggling of games. That way I'll ensure I squeeze all the fun out of each title that I can--you know, when I'm not at work or writing this website for you fine readers, of course.

In closing, "Saints Row IV,"  is something you will most likely enjoy, try it!
Posted by David Charles Bitterbaum at 2:40 PM