Tales From The Dollar Bin: Tribe #1

The Success and Failure of "Tribe" 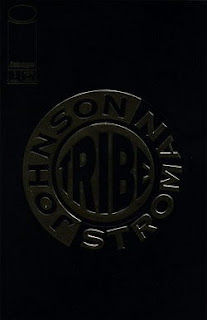 "Tribe" was a comic series best described as "short-lived". Its first issue came out via Image comics in 1993, and then eventually a 2nd, 3rd, and "Zero" issue were released under two different publishers over the years (Axis comics and Good comics). The first issue also happened to sell over a million copies and is argued by some to be the best-selling comic with a black creative team (writer Todd Johnson and artist Larry Stroman) ever made. Plus, that the majority of the characters are people of color is worth noting also. Considering how that first issue did so well this raises the question of why only one issue ever came out from Image, and the rest sort of trickled out slowly via other publishers.

After some digging about I found an old forum discussion on CBR about the very subject of just why "Tribe" was cancelled. From the mouth of one of Image's founders, Erik Larsen, we are told basically it was because the thing was delayed beyond all high-heaven. Even the first issue was "months late," and,  "issue two was nowhere in sight." "Tribe" wasn't being picked on, it was cut with some other Image titles such as "Stupid" and "Trencher", which are two books I've never heard of and have no idea about the contents of, but will guess can probably be found in a dollar bin somewhere too. Clearly Image had no ill will toward the comic, they just were discouraged about how the darn thing seemed to be being made so slowly. 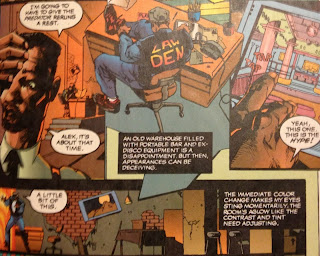 The story is basically about a group of powered individuals who come together to fight a corporation made up of European and Japanese interests, or "Europan". As this was just a first issue we don't get too much plot, instead having various story-connected segments occur that introduce us to some of the characters in the series. It is perfectly fine stuff, if not extraordinary story-telling. The art is worth talking about for sure though, be it because you love it or hate it--the primary two responses to the illustrator, Larry Stroman.

Stoman's artwork is an acquired taste for many, but I enjoyed seeing his work for the first time when reading the sadly-just-ended "X-Factor" (fun fact, he worked on an older version of "X-Factor" with the same writer, Peter David, too!) and viewing it here in "Tribe" was neat too. He draws with a slightly exaggerated style that can make his characters look that extra bit grotesque and almost caricature-like, and in an era where sometimes we get a "house style" from publishers, seeing Stroman's shocking out-there page designs and illustrations is cool. 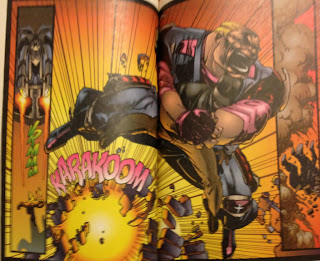 As this comic sold so many copies it isn't a surprise that you can find it in the dollar bin without too much trouble, but it is a surprise how even today so few comics have minority individuals in a lead role, especially considering we are now 20 years after the original release of this comic and it is still rare enough to have a series where minority characters are at the forefront of your comic that it is a major deal when such a thing occurs. The way this series basically died is also an example of something that seems to happen far too often with comics, namely they get really, really delayed. True, not every series has a multi-year gap between issues such as "Ultimate Wolverine VS Hulk", but plenty of series seem to either come out later than intended, or have fill-in art of a questionable quality to get a comic out on time.

In closing, when I think of the comic "Tribe" I consider how even today we still have very little representation of people of color in comics (whether as characters or within the comic-creator community), and I think of how delays can kill any momentum a series has, even if it is the kind of momentum other comics would kill for--what publisher wouldn't give an arm and a leg to sell over one million copies of a comic these days? "Tribe" is a comic with decent writing and divisive art, but it also is both an encouraging artifact in its illustration of how comics about non-white characters can sell, and a warning symbol about the danger of delays. "Tribe" was both an enormous success and a huge failure, depending on which aspects of its history you choose to look at, but in the end there is no question it makes for an intriguing....tale from the dollar bin!
Posted by David Charles Bitterbaum at 2:34 PM