Tales from the Dollar Bin: X-Force #1

I've created a new segment that should serve to entertain and inform. I hope to do it somewhat-regularly. Now I shall debut it with the description I will always have to kick it off.

There are comics which are worth incredible sums of money, but so many of the most interesting, tragic, or just downright weird can be found for a simple dollar or less in a  store's "dollar bin". There, comics that never gained much popularity can be found alongside those that sold so much as for a copy to be worthless. "Tales From the Dollar Bin" aims to explore these comics, be they a single issue or an entire run of a series. From the great to the miserable, some of the best treasures and worst nightmares can be found in those infamous boxes. Let's have a "tale" now..
.
The Twisted Saga of "X-Force #1" 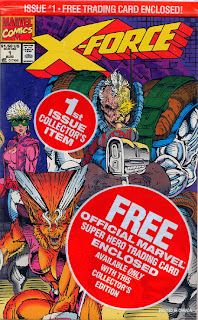 It is no secret that I basically now don't care for Rob Liefeld as he went from a mediocre artist who at least seemed like a really nice guy, to a complete and utter jerk. He used to be quite the hot property though, and this dollar comic I found attests to that.

The first-ever issue of X-Force (in their own self-titled comic, at least) is the 2nd best-selling comic ever, behind the first issue of X-Men back when it was re-released in the 1990's. This comic came out during the speculation-craze when people were buying poly-bagged comics with all kinds of extras (trading cards, shiny covers, etc.) and storing them away unread in the hopes they would someday be worth something. Considering how many copies this comic sold it should come as no surprise that even still in its original plastic bag with the trading card it is basically worthless despite the label on the plastic packaging declaring it a, "collector's item." The fact that there are people who spent so much money out there on comics such as these and then went broke when the market crashed makes the whole thing as fascinating as it is sad.
At the store where I acquired this first issue of "X-Force" there were four total copies of just the first issue, still sealed in the original packaging along with a few "loose" copies. This got me thinking how all the way back in 1991 someone could have bought this comic, and kept it sealed-shut in the hopes it would someday be worth big bucks. As time went on and the comic-market basically crashed they probably cursed this comic, glared at it with rage, but somewhere deep within their heart hoped it would be worth at least some money at some point, keeping it encased within its plastic prison, never to be read, with only a trading card packed by its side to keep it company.

Maybe one day our theoretical person just gave up, sold all their comics in bulk--the valuable and worthless--and the store where I bought this got a few of the copies, didn't even bother to open them, slapped a "$1.00" sticker on the copies, and shoved the four sealed-up issues of "X-Force" into their dollar bin never to be seen again until someone with a passing interest in curiosities such as these (me) bought one.

How is the comic itself though? Well, its a 90's-era Liefeld "X-Force" comic, that's all you really need to know. It's classic over-the-top Liefeld and otherwise is unremarkable other than how the comic itself kind of stands for everything that went wrong with comics back then--the mindless buying of multiple issues, gimmicks, and the inevitable bursting of the speculation bubble. I mean, the cover seriously declares itself a special collectible twice with the labels on the poly-bag, is that not absurd?
In some ways a comic such as this can serve as a warning to the comics of today. We have poly-bagging making a return with the occasional "big-deal" comic having the wrapper, often to obscure the cover which inevitably gives away a major plot point (that everyone knows anyway thanks to the internet). A mere week ago "Age of Ultron #10" had a little black poly-bag to hide away any secrets within the comic. This of course also served to theoretically make it more valuable to anyone who leaves their comic sealed shut within the plastic, never to be read and enjoyed, but instead treated as some sort of investment in the future.

The Story Comes to its End
I've always felt if you're buying new comics in the simple hope they'll go up in value you're doing comics as a hobby wrong. Go ahead and buy old ones that have some worth and maybe sell them, but if you truly believe that snatching up a hundred copies of some new series or big event's conclusion will make you rich, well, you're living in a fantasy land (although, to be fair, anyone who did pick up a bunch of "Walking Dead"  #1's probably is living the high life right now).

In the end, whether that first issue of a comic turns out to be worth thousands, or barely a dollar, is purely up to the desires of the market and a healthy helping of sheer chance. Only the passage of time will determine if something becomes worth a lot of scratch, or just another...tale from the dollar bin!
Posted by David Charles Bitterbaum at 9:08 AM