Another Warren Ellis Project I Won't Get To Read Anytime Soon 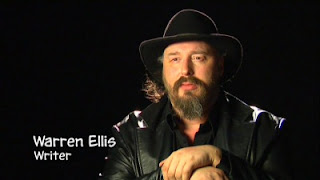 Warren Ellis has a variety of projects I'm waiting for him to finish. There are things he says are basically dead -in-the-water such as Desolation Jones, but then there are comics by him that supposedly will someday be finished, such as Doktor Sleepless, Anna Mercury, Fell, and etc. Interestingly, the latest thing by Ellis to be delayed is not a comic, but a piece of prose work. Plus, this time it isn't his fault per se.
Yes, "Dead Pig Collector" is on hold due to issues between Ellis and his (former) publisher. I was upset to hear Warren Ellis terminated his relationship with Mulholland Books for currently-undisclosed reasons as the man makes such good stuff. Whatever issues he was having I wish him well and hope his latest project that they were going to publish digitally and possibly physically (I think) sees release sometime soon.
Posted by David Charles Bitterbaum at 4:38 PM