Space-Aliens and Madmen.
There was a time where Norman Osborn was basically the boss of the Marvel Universe and life sucked for almost anyone who considered themselves a super-hero. It was called, "Dark Reign," and it spun out of the "Secret Invasion" event. Despite not actually being a mini-series or such, it was a pseudo-event that occurred in a variety of ongoing comics and had some mini-series that examined what this upside-down world was like. I'll be talking in-depth about one of those mini's which was known as "Skrull Kill Krew". But first, let's talk about the comic I'm discussing today.

Osborn's "Dark Reign" ended with the horrendous "Siege" mini-series that I hated more than any Marvel event I'd read (at least until "Fear Itself" which I literally gave-up on). However, one good thing to come from "Siege" was a superb mini-series by Kelly Sue Deconnick titled simply, "Osborn". It is no secret that I loved Osborn as early as its 2nd issue and was such a fan I went on to interview Kelly Sue Deconnick about it and her other works.

Later on, Brian Micheal Bendis would have a mini cross-over between two Avengers books he was writing where Osborn tried break out of Prison and take over America again only for the Avengers to stop him because his plan was incredibly stupid--an odd counter to the behavior of the clever and calculating Osborn seen in Deconnick's series. I'm talking about quite recent events and the point of this post is to flash-back, so let's start doing so by discussing the Skrull Kill Krew--but not the Dark Reign one. No, first we're going to go back to those magical days of Crystal Pepsi and "The Spice Girls" known as the 1990's. God help us all.

From the Origins of the Kill Krew to the Modern-Day
Back before Grant Morrison started hating Mark Millar's guts for reasons we still aren't aware of (and it is their own business anyways, so I shan't pry) they collaborated on a mini-series known as the--you guessed it--"Skrull Kill Krew" It took the story-line of how back in the olden days of comics the Fantastic Four had tricked some Skrulls into thinking they were cows, and this series had the idea that one of those Skrull-cows accidentally was slaughtered and people ate its meat. The resulted in most dying, but a few gaining the shape-shifting abilities of Skrulls...while also still suffering from the fact they were dying, and being really mad about it. 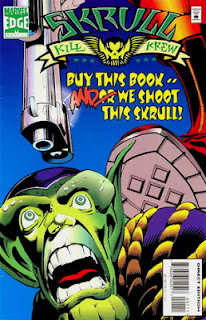 It was a pretty wacky series and ended with the Krew basically going off never to be seen again, at least until  "Secret Invasion" when writer Dan Slott brought them back in the "Avengers Initiative" comic to help fight against all the Skrulls they so desperately hated. Upon their return they were given their own mini-series that took place in the aftermath of "Secret Invasion" and dealt with their being funded by Osborn's new organization, "H.A.M.M.E.R." to keep doing what they did best, kill Skrulls.

Let's Discuss The Actual Mini-Series
You're all caught-up so now I'll tell you about the "Dark Reign"-related mini-series itself and why I liked it a great amount.

Basically, I enjoyed the newest incarnation of "Skrull Kill Krew" because it was wacky while also at times being surprisingly deep in its asking questions of morality and just what made Skrulls count as "evil" compared to the fact that the Krew was working for the most villainous man around, Norman Osborn. Between breaking up a human-cow fetish club run by Skrulls who were actually killing the humans that liked pretending to be cows (I told you it was silly), learning they were genetically basically Skrulls due to their illness mutating, and starting to realize that while there are evil Skrulls, some were in fact born on Earth and had no desire to cause trouble, the Krew eventually figures out they want to in fact protect the good Skrulls. 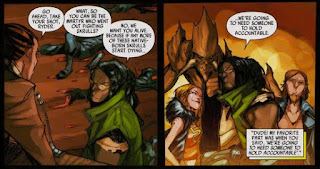 The Krew warns Osborn to leave native-born Skrulls alone, and then ride off into the sunset once more to not been seen for another decade or so, I suppose. In the end, an enjoyable time is had by the reader, and a quality book is done.

Now, "Osborn"
The Krew's warning to Osborn was kind of pointless, because it was within the span of a few months that he found himself ousted from power and locked up far from the public. I guess Bendis was already concocting plans for Osborn as he did his big attempt at a coup in the pages of "Avengers" and "New Avengers" a year and some months later, but before that happened Marvel must have wanted to keep the character in the public's eye because they gave Deconnick the opportunity to write this mini.


One of the reasons I enjoyed "Osborn" so much was that Deconnick masterfully wrote dialogue, with Osborn having some of the best quotes I'd seen from the character in years. Plus, his fellow prisoners that we meet are all intriguing, be they a surreal space-alien, a monstrous spider-God, or a woman who has genetically altered herself into a killing machine. I also deserves mention that artist Emma Rios turns in some beautiful pages that will astound anyone reading this comic.

The ending to "Osborn" itself was slightly disappointing because it just put him back in prison system he had worked so hard to get out of over the course of the mini, but set things in place for when Bendis used the character again by introducing some of the characters Osborn would work with and having the public be somewhat on his side due to his pointing out in this series how he was basically being held without trial--something the government can't do to an American citizen (but seems to have no trouble doing with foreign folk we think may be terrorists, but that's a whole different rant).

"Osborn" is a stellar mini-series that a lot of people may have missed out on because by the time it occurred they were sick of the character from all of his "Dark Reign" appearances. It's a shame if people didn't read it though, because this is just a fantastic collected five issues that ranks among some of my favorite comic-works.

To Be Seen Again?
As I said earlier, after their mini-series the Skrull Kill Krew seemed to just disappear again, with us readers now having to wait for some other writer to have enough of a fondness for the characters (or excuse to use them) for another appearance to occur. Norman Osborn is of course such a ubiquitous character due to his close ties with Spider-Man that he'll most likely never disappear for long, but after his mini and brief attempt at a power-grab in Bendis' comics, Osborn has been surprisingly quiet--though he is beginning to pop-up more and more in the series, "Superior Spider-Man".

I suppose the moral of this post is that when a character (or characters) has enough popularity or writers who are fans, it is only a matter of time until said character/s have an appearance in our comics. This is a positive thing when you get really good comics such as the two mini-series I've just discussed, but it goes without saying that for every "Osborn" or "Skrull Kill Krew" we get there are plenty of awful things that are put out too. That's just the way of comics, movies, and any form of media, though. Anyways, these comics were superb and I give them these ratings:
Dark Reign: Skrull Kill Krew: 4.5 out of 5 stars.
Osborn: 5 out of 5 stars.

Posted by David Charles Bitterbaum at 10:30 AM