There is a panel from Young Avengers #4 that sums up how great this comic is, and how much it knows it. The scene is one character making a reference to an old movie, but twisting it into something new and even better: 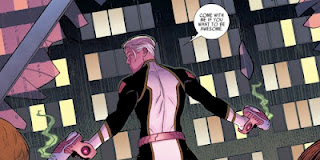 Yes, "Come with me if you want to be awesome," is a wonderful way of putting it, and within that one panel a lot of how Kireon Gillen's best writing is made finds itself shown.

You see, Kireon Gillen has written a great many comics, with many of them being quite stellar, but it was quite possibly one of his first works, "Phonogram: Rue Britannia," and its sequel, "Phonogram: The Singles Club," that rank among his finest pieces. It took Gillen's familiarity with and love of popular culture (mainly music) and created a world where music itself was a magical element that people could wield. It had these amazing original ideas that built off of people's familiarity with music, 90's rock music in particular, and was both not too heavy-handed in its utilization of pop-culture, but created a perfect balance of newness and things we know and love. Gillen is sort of doing the same thing with Young Avengers but in a different way.
Everyone in Young Avengers are characters a lot of people who read comics know. Heck, some were in the previous versions of the Young Avengers! You have Kate Bishop, the female Hawkeye, the kid-version of Loki that Gillen wrote during his much loved run on, "Journey Into Mystery," Wiccan/Billy Kaplan, a boy with magical powers, Hulking/Teddy Altman, Wiccan's boyfriend and a half-kee-half-skrull alien, Miss America/Amanda Chavez whom was first met in Joe Casey's stellar, "Vengeance," and lastly my personal favorite, Marvel Boy/Noh-Varr (his publication history is complicated to say the least, but let's just say this incarnation of him is on par with his first appearance when Morrison introduced him). Gillen takes our familiarity with these heroes and subverts it into something that has their personalities and takes into account their past, but makes something altogether new and delightful. Kind of like taking an old Terminator quote and changing it into something different.

Perhaps one reason this series has reminded me of Phonogram other than its methodology is that the art is provided by none other than Gillen's collaborator on those books, Jaime Mckelvie. All of those factors make this feel like a third-helping of Phonogram, just with super-powers instead of magic-music. Plus, there is a scene where Marvel Boy talks about how much he loves earth-music in the first issue too, as if the comic is giving us a little wink. 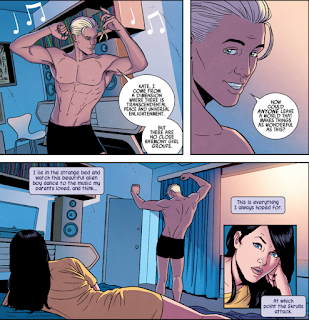 I've said how the start of this series is great so far, but I haven't actually told you about the plot at all, have I? Basically, it starts out with some seemingly disjointed events occurring, with the major one being how because Teddy misses his mother (she died during Marvel's "Secret Invasion" event) Billy uses his powers to find a dimension just like ours but with the exception he grabs her into our world before she dies. As the shocking end of the first issue reveals though, Teddy's mom isn't really his mother, but this multi-dimensional parasite that everyone has to get together to fight. I'm summing it up in a manner that makes it all sound pretty basic, but trust me when I tell you the comic shows all of this story and the action wonderfully, be it through Gillen's master-scripting or Mckelvie's amazing artwork.

Regardless of how much you do or do not know about the Marvel Universe, you can read "Young Avengers" and still understand everything that is going on, while also enjoying the stellar artwork. Between the clever-but-not-overdone use of popular culture, great writing that makes us care about the characters, and good ol' super-heroics, this incarnation of "Young Avengers" is spectacular. Don't let the fact this is another of half-a-dozen or so "Avengers" comics make you scared to pick this up, the series stands very well on its own, independent of any current or past comics. Folk should definitely make sure to get back-issues of this comic or the trade which will collect these first five issues along with a little prologue story that happened in a comic called "Marvel NOW Point One" which wasn't too good except for the Young Avengers bit. Really, read this! Now, I will leave you with another amazing page from issue #1 that takes place right after that quiet scene with Kate and Marvel Boy talking about music: 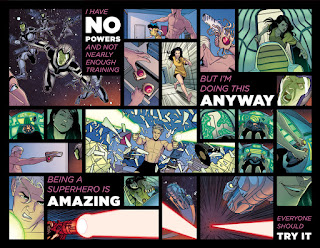 Yeah, this comic is definitely rated:
5 out of 5 stars.
Posted by David Charles Bitterbaum at 3:28 PM