Quite A Good Read, The Westwood Witches #1 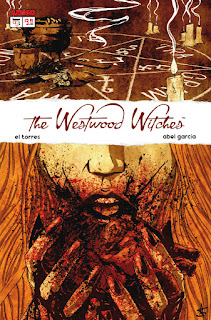 Amigo comics is a new publisher who've got a few comics coming out. I reviewed their first issue of "Rogues" and found it enjoyable but not overly amazing. When I heard about "The Westwood Witches" I decided I would pick up the first issue, and I'm glad I did as this was quite the stellar comic.

Things start out pretty silly, a man is caught by some witches, and sacrificed to them to call forth a demon. It all reads as quite absurd even if the art by Abel Garcia is good, but then its revealed that the purple-prose we've been reading, is in fact all a fictional story written by our main character, Jack Kurtzberg. It seems he once wrote a  demonic romance-novel as a joke more than anything else, but high-school girls around the nation fell in love with it to a point it became a bestseller with a movie-version on the way. Now, Jack has to write more trashy horror-erotica or his newly plush life will be no more. This little twist at the start of the book was quite cleverly-meta in its commenting on how crappy fiction can become a big seller (not that I'm naming any names...Twilight), and from there on things only get more interesting.
Jack and his wife move back out to his childhood home of Westwood in the hopes it gets his creative juices flowing again, and we see through a couple of scenes that Jack's neighbors clearly aren't all they seem, and something definitely is amiss. Jack is too busy trying to write his book and keep his wife happy with their newly pampered-life that he doesn't notice that while his new neighbors seem nice, the women are quite clearly...witches. Yes, that makes this sound like the cliche, "Man meets the very monsters he writes about," story, but trust me when I tell you that through El Torres writing you really get a feel for Jack, and the ending of the book makes it clear that it isn't necessarily just witches Jack has to worry about, but even more twisted and demonic creatures.
"The Westwood Witches" is expertly written, and the art by Abel Garcia impresses throughout the whole book with its mixture of the realistic and ethereal both drawn beautifully. I would definitely recommend people check out this book, and if Amigo's good start with title is an indicator of future books from them, they will definitely be a new publisher to watch.
4.5 out of 5 stars.
Posted by David Charles Bitterbaum at 12:00 PM