The Melancholic Humor of Nathan Bulmer and Noah Van Sciver 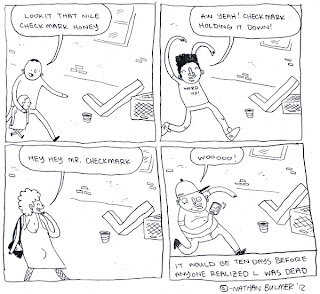 Funny, In A Really Depressing Way
Somewhat recently I was introduced to the work of Nathan Bulmer, and for some time I have known about and read various works by Noah Van Sciver. Both men are pretty known in the independent-comics scene (though what truly entails "independent comics" is an argument people are always eager to have) and both make comics that can be quite funny, if also horribly sad.

Nathan Bulmer
Bulmer's comic-books are titled "Eat More Bikes" and he works in the format of a four-panel grid, and through this method he tells his jokes that can vary from seeming like a small little story, to a simple pun with a punchline in the last panel. One common theme is that many of his comics are hilarious, but also carry a twinge a sadness. Often there will be comics (he makes them daily) that deal with death, sadness, misery, and the like. True, sometimes you get really cute comics like this one... 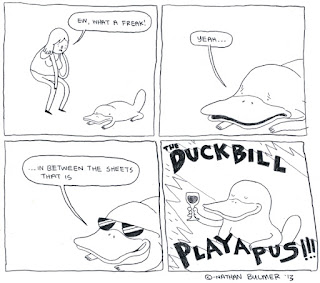 ...but a fair amount of the time his comics are quite cynical in their outlook on life. This is a trend I noticed in Bulmer's online strips and in the assorted mini-comics of his I've picked up over time.

Noah Van Sciver
Van Sciver has been involved with comics, doing his own thing for some time now. Many of his works are sad, and not even all of the ones with a miserable tone have a joke. "Dueling" is a comic by him about two men who did just what the titles says, dueled, and despite having many chances to not try to kill each other, they ended up shooting their guns, with one man winning. He didn't really win though, as the narrator (a man regaling a youth with the story) tells us, instead realizing he was now little more than a murderer before taking his own life. Its abysmally dark stuff. 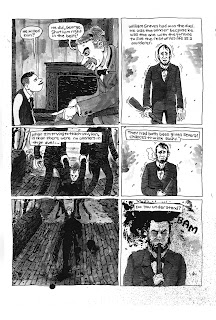 Some of Van Sciver's depressing comics are very funny though, even if your'e sobbing while you are laughing. I read Van Sciver's "1999" and didn't realize the whole comic was slowly setting up one cruel punchline.

"1999" is about a man named Mark who works in a sub shop, and who wonders if the world may very well end with the arrival of the year 2000 (you may remember how worried we all were about Y2K and such). A new employee named Nora appears at the shop and she and Mark beomce fast friends. Upon her reveal that she's in an open marriage, she and Mark begin having sex on the job. They chat about everything from their dreams in life to their actual nightmares (one scary one is that they suddenly lose all their teeth), and all is good. However, Mark develops strong feelings for Nora soon enough and it turns out she isn't in an open marriage, she's just cheating. 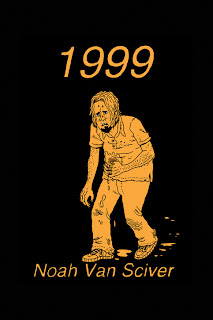 Everything gets worse from there on out. Mark ends up losing his job, and on New Years Eve stabs himself in a bar with his own pen. All of the sudden things look up however when at the hospital Nora arrives and tells Mark she actually wants to be with him and loves him...and then all his teeth fall out because its clear he's just dreaming that she actually came to visit. Now that's a punchline.

Smiling Through the Tears 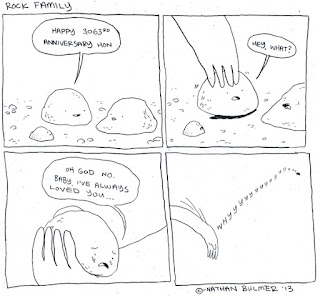 Both Bulmer and Van Sciver find a way to show how even the saddest aspects of life can be made humorous through either silliness to defuse all the misery(Bulmer in most of his comics) or by taking something really depressing and making a twisted joke out of it (Van Sciver in "1999"). Life at times can be really disheartening, but perhaps even in the darkest of moments we can find a little light in the form of humor.

The point of this post is, if you aren't reading Bulmer's stuff you really should be (visit his site which links to his books and comic-a-day blog), and Van Sciver has an assortment of quality works himself too which you can see some of at this site. Both men illustrate how even in misery there can be humor, and I like that.
Posted by David Charles Bitterbaum at 4:04 PM