Should I Try-Out This DC Universe Thing? 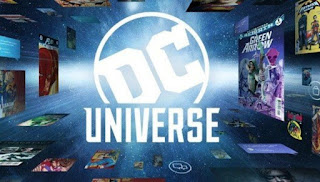 Okay then, I previously wrote about my confusion regarding exactly what this DC Universe app/service was. Now that it has been released and out for awhile I think I finally have a grasp on it. The thing essentially is a way to pay a monthly fee in order to gain access to a curated selection of all-you-can-read DC books (which side-steps Comixology and saves DC paying it, Apple, or Amazon--who owns Comixology--any fees) along with an assortment of DC films, television shows, and original content. It is a combination streaming-service, comic-app, and so forth. Am I right, I think I'm right? Anyways, I am thinking maybe I should try it out, as I am curious about if it is in fact a good service for watching/reading content, plus I've heard the exclusive-to-DC-Universe show, "Doom Patrol," is remarkably good. I mean, when I heard it had Matt Bomer and Brendan Fraser I was basically already all-in.

There is a free 7-day trial period, and those, "Doom Patrol," episodes are being released every Friday so I could watch at least two and get a feel for the show as well as exploring the app/service. I am a little annoyed there isn't an easy way to launch it on my PlayStation 4 and instead to get it on the television I'll need to use a work-around method like having it stream on the computer and be displayed on my T.V. via the Chromecast or such, but with my PC and our old iPad reading some comics shouldn't be hard. Yeah, I think I maybe will go ahead and try-out this DC Universe thing when I have some free time, even if I hate most aspects of it I still get a solid dose of Bomer and Fraser, after all, I love those actors.
Posted by David Charles Bitterbaum at 1:46 PM