I'm Watching the Super Bowl Today for One Reason 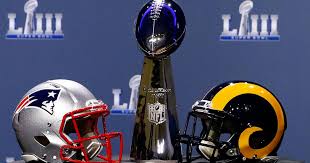 I'm only watching the Super Bowl today for the half-time show. Yes, I'm being serious. The region of Saint Louis despises the Rams because the owner, Stan Kroenke insulted the area and everyone who lives in it repeatedly when he up and left for California, and I personally do not like the New England Patriots because even in my limited knowledge of football I'm familiar with their coach being a cheater, and how star-player Tom Brady engages in bypassing rules as much as he can too--in addition to engage in poor sportsmanship, pouting and engaging in blaming everyone else he can whenever he doesn't win/get his way (seriously, there are articles from every year he lost the Super Bowl or big games discussing how he was petty). I wish both teams could lose, so I'm not watching the game for the game itself, that much I know.

I am watching for the half-time show because I am extremely excited to see Big Boi--a member of my favorite music-group of all time, OutKast, perform along with the generally solid Travis Scott whose music I relatively enjoy. Oh, and Maroon 5 is going to be there, which is good for them, Adam Levine is perfectly pleasant, after all. Perhaps while waiting for the half-time show I'll be able to enjoy some (presumably) humorous advertisements and pay vague attention to whether the Patriots or Rams have much success against one another. I really don't care for either team, but I love me some Big Boi and am a fan of Travis Scott so that should be good fun.
Posted by David Charles Bitterbaum at 10:38 AM