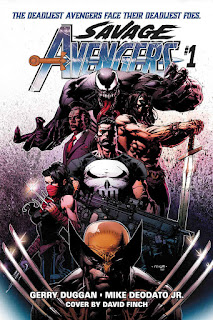 I saw artwork for an upcoming comic but didn't realize it was a book that was actually happening until my pal Tucker Stone at The Comics Journal mused on how bizarre it looked and the official solicitations came out. The comic is titled, "Savage Avengers," and it features the most violent heroes and anti-heroes around. Made-up of Venom, Elektra, the Punisher, Wolverine, Brother Voodoo ( because every Avengers team needs a random magic-user) and for some reason Conan the Barbarian--who Marvel got the rights back to a little while ago--this looks like a team of Avengers more likely to shoot, stab, and eat the brains of villains than any other Avengers team in history; that actually kind of sounds like a concept so crazy it could be fun.

It is as if Marvel wanted to think-up the most extreme and over-the-top team it could, then went that extra step further. Marvel went so heavy on fan-service it is almost gluttonous in its delicious absurdity. They're out here saying, "So we heard you like Venom and Wolverine a lot so we put them both on an Avengers team with the Punisher for optimal bloodshed, plus Elektra because she's probably our deadliest female character. Oh, and we took Conan the Barbarian and inserted him into the modern age with his big-ass sword. Why, you ask? Because fuck you, you want this, that's why!" Gerry Duggan is a writer who has done a good job furiously-straddling the line between funny-and-gruesome before on work such as his run with, "Deadpool," and Mike Deodato is a skilled artist who drew some impressively gross scenes of Venom literally biting-off people's appendages back in the days of the Warren Ellis-written run on, "Thunderbolts," so I imagine this book won't want for a colorist eager to use various shades of blood-red. Frankly, whether the comic is good or miserable I'm just excited to be able to read it so that upon finishing the book I can place it down and declare, "Man, those Avengers are savage!" Then I'll start to laugh loudly at my own joke, much to the confusion of everyone else at Starbucks. Good times.
Posted by David Charles Bitterbaum at 1:25 PM