Album of the Year: "Golden Hour," by Kacey Musgraves--2018 in Review 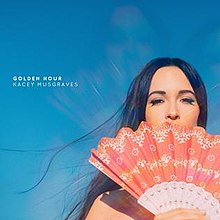 I honestly don't like much country music. I relatively enjoy Garth Brooks, the song-catalog of Dolly Parton has had some solid pieces, and Shania Twain is usually catchy, but that's it. Then I would see Kacey Musgraves on some television shows doing songs from, "Golden Hour," and found myself awestruck. Having listened to all of, "Golden Hour," many times now, I can say without a doubt it is my album of 2018. It is funny I say how I'm not usually big on country music, as Ms. Musgraves herself was at times rejected by a lot of Country fans due to being outspoken in her support of LGTBTQ issues, cannabis decriminalization, and otherwise being more liberal than the stereotype might be of some country artists. Her amazing talent however has resulted in everyone recognizing just how superb, "Golden Hour," is, with it surprising folk when at the Country Music Awards she won album of the year. I'm not surprised to see her being given the accolades she's earned, it is a fantastic record.

I don't like every song on the album, but even if I didn't quite get into, "High Horse," like other people, but there is enough genius and beauty with earlier song such as, "Slow Burn," "Lonely Weekend," and, "Butterflies," along with later songs such as the titular, "Golden Hour," that it is a majestic record you don't listen to so much as gleefully absorb. Kacey Musgraves has given us the album of 2018, and I for one sure am excited to see what she does next!
Posted by David Charles Bitterbaum at 3:27 PM