Video-Game of the Year: Red Dead Redemption 2--2018 in Review

This Was Kind of a Given 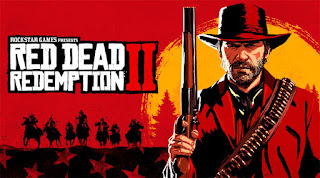 I don't play a ton of video-games, because I'm not made of time. Something has to be either short and sweet or worth my picking at slowly for me to want to commit much of any effort. "Red Dead Redemption 2," is by no means short, it is an epic that I've been gradually unraveling, and it is great. I already declared how it is a masterpiece with all the amazing elements and the flaws, because the damn thing is amazing. Whether I'm doing missions or just riding about the countryside exploring, this is a phenomenal game that I have loved picking at, and anyone who says it is too long or overstuffed is entitled to their opinion, but I'd disagree.

"Red Dead Redemption 2," is phenomenal and I expect to be playing it off and on for a good deal of time. It is a game I'm willing to dig into and miss-out on other potentially good ones just so I have more time to play it of the limited gaming-time available what with having grown-folk responsibilities. Now if you excuse me, I'm going to go hunt some gators outside of Saint Dennis as long as they don't swallow me whole first.
Posted by David Charles Bitterbaum at 10:09 PM