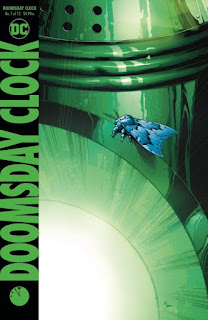 When it was first announced there would be a big comic featuring a cross-over between DC's heroes and the, "Watchmen," Universe I was skeptical. I said how the only way I could see it working as if it was sufficiently clever and meta enough to make a case for itself. If it just had the heroes duking it out that would be moronic, but making a case for how the existence of, "Watchmen," forever altered comic-books as we know it could work. It would be clever to make a metaphor for how, "Watchmen," had an impact on the DC-Universe, and making that metaphor literal in a way could work. Well, the cross-over that has been coming out, "Doomsday," clock had its eighth of twelve issues released not too long ago, and it has been doing exactly what I theorized it needed to do, and has been...amazing?

"Doomsday Clock," should have been terrible. It should have not worked at all. Instead it has been great thanks to Geoff Johns doing some of the best writing of his career and Gary Frank contributing his usual amazing artwork. The comic even existing is still a smack in the face to Alan Moore, but even people and websites who expressed disgust at the comic occurring have been agreeing with me that it is really good. "Doomsday Clock," has been a mixture of meta-commentary on the history of the DC Universe, an expression of modern political concerns and controversy, and a suspenseful thriller all in its own right. Assuming it manages to stick its landing, "Doomsday Clock," may very well end-up being a worthy sequel to, "Watchmen," and that wouldn't just be a surprise, that would be an absolute blindside--but a good one, of course.
Posted by David Charles Bitterbaum at 10:10 PM