Tumblr to Ban All Adult Content, Shoot Self Squarely in Foot 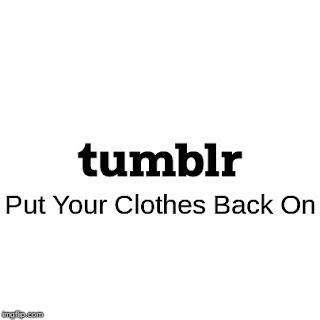 When it comes to social media networks, Tumblr is one that has been around for a bit. Present since 2007 it is a visual-focused social media network, letting people put up bits of text, but more known for its posting of videos, images, memes, and so forth. It also has a lot of adult content. Whereas sites such as Facebook never allowed NSFW stuff from the start, Tumblr was a bit of a Wild West, with all kinds of sexual-stuff being posted. This brought with it troubles too, with a degree of underage sex-content at times being on the site before eventually getting taken-down. Still, when it comes to a social network people use for porn, Tumblr is the first one to spring to mind. That is arguably its bread-and-butter besides memes. Therefore, hearing that as of December 17th Tumblr will ban all adult content is akin to hearing that come December 17th a steakhouse is only going to serve vegetarian meals.

Yes, Tumblr had issues with sex-spambots and some people trying to get underage porn on there. It would make sense to address that as opposed to outright banning anything adult, however. There were already some safeguards in place for minors, but this is like using a sledgehammer to squash a fly. Plus, the rules are very odd. For example, showing people outright having sex is obviously banned, and you can have most of the female breast shown in images, but don't you dare show a nipple. Why exactly America is perfectly fine with a whole lotta boob being shown as long as the nipple is hidden continues to be a mystery, but that is the the rule.
One demographic already concerned are LGTBTQ individuals who in recent years had found Tumblr to be a space they felt safe discussing their sexuality and how that--obviously--at times meant discussions or images of sex. It is telling that even completely appropriate posts which happen to have LGBTQ content are already being reported or auto-flagged for the upcoming shutting-down of anything adult on December 17th. There is a vibe that if you post a picture of you kissing your opposite-sex partner that'll be fine, yet mysteriously an innocent same-sex kiss will be given a marking of pornography--quite possibly from hateful people. Oh, and speaking of hateful people, while Tumblr is exercising its rights to control what gets posted on its website by banning porn, it meanwhile is oddly silent on Nazis, Alt-Righters, and other posters of hate-speech. Apparently a nipple is more offensive than someone declaring how they want to kill minorities.

Tumblr has every right to control what is put on it, this is not a violation of free speech. When you have a website you let other people use you are allowed to control what is posted, and if people dislike it there can go somewhere else online. It is a violation of logic however, as once Tumblr bans all adult content it will most likely wither and die along with other social-media sites we've mostly forgotten. Many Tumblr-users have already planned an exodus, be it to to other somewhat-similar social networks that are smaller but allow adult material, their own website, or the like. Unless this massively negative reaction causes Tumblr to change course, come December 17th you most likely don't want to visit Tumblr if you're looking for anything raunchy to enjoy. I myself never found Tumblr that useful for promoting the blog and basically just kind of clumsy for posting anything, adult or age-appropriate, so I have no, "Dog in this fight." I do offer sympathy to the Tumblr-users who are now being told their content is not wanted, however, as that must be stressful and discouraging.
Posted by David Charles Bitterbaum at 1:26 PM