Ongoing Series of the Year--2018 in Review

Continuous Stories
An ongoing comic will of course end at some point, be it permanently done or returning as soon as a month later with a renumbering. That said, some comics have had some many issues come out or still have plenty more on the horizon that they are indeed, "Ongoing," in some sense of the word. Two in particular this year stood-out to me, and they shall now be recognized.

The Tales Go On 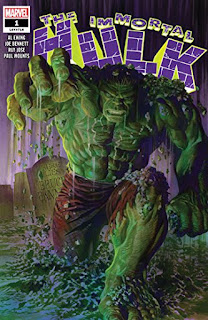 Immortal Hulk
I don't read a ton of Marvel books lately. I continue to enjoy, "Runaways," and ever since, "Captain America," re-launched under the pen of Ta-Nehisi Coates it has been solid. Otherwise, I avoid a lot of the books that seem to just tie-in to the latest big event or which otherwise get quickly dull with all the supposed plot-twists (apparently those old-school X-Men who came to the future finally were able to return home, even though last I heard their, "Home," didn't exist anymore). However, "The Immortal Hulk," is a must-read right now. It is a comic that takes the Hulk and revels in the fact he is more of a monster than a hero.

Each issue has gotten stranger and more full of scary and disgusting images that I'm amazed Marvel has allowed what has occurred in a mainstream super-hero comic. We've got a Hulk who will kill people if needed, artwork that emphasizes body-horror and nightmarish imagery such as how at the end of the 10th issue it appears the Hulk has quite literally gone to a version of Hell. Al Ewing is doing an amazing job writing the comic and on the issues that feature Joe Bennett doing art I find myself shocked at how grotesque things can be. This is a horror-comic through a specter of hero-books, and it is fantastic. 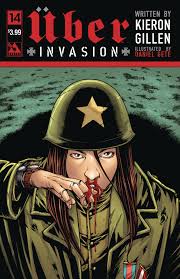 Uber: Invasion
Kieron Gillen's little comic, "Uber," about a world where the Nazi's and Allied powers developed super-humans to fight has grown into an epic tale spanning two series (the original, "Uber," and now, "Uber: Invaison,") plus a number of original characters mixed and mingled with historical figures--who in this alternate reality sometimes are flourishing and other times meet horrific ends. The overall tale has one arc left, I've read, and Gillen has been fantastic over these years working with assorted artists to portray a mixture of real-world-based strategy mixed with over-the-top explosive violence.

It is also funny to think how when this series first started everyone could agree how the Nazis were bad-guys who needed to be punched, but now over the years we have had the alt-right emerge, Neo-Nazis marching openly in American streets, and Gillen’s comic has shown just how political simply having Nazi’s clearly be evil can be. It has lots of little subtleties as the Allied powers juggle their desire to win the war with worrying what their fellow world-powers might do after the Nazi's fall, but it never forgets the Nazis are the bad guys. I await the final arc with bated breath.
Posted by David Charles Bitterbaum at 7:52 PM