Limited in Length, Not In Scope
A mini-series (6 issues or less) and/or maxi-series (generally 12 issues) may not be as long-running as an ongoing comic, but that doesn't mean their concepts or effort are any more limited. This year one maxi-series I adored finished and a mini-series I am loving is nearing its end. I wanted to make sure and sing the praises of each of them. 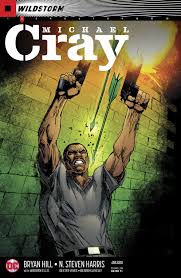 Wildstorm: Michael Cray
While Warren Ellis has been offering his new take on the Wildstorm universe, this snazzy spin-off (of which there were supposed to be more, but only this one has happened so far) is doing all kinds of crazy and experimental stuff that caught my attention. Having finished this year, the 12 issues that came out had the titular Michael Cray basically tasked with taking-out terrible people threatening the safety of the world, and these people all happened to be takes on assorted DC heroes with just the slightest change making them often terrible, monstrous, beings. There are plenty of, "The heroes are evil in this Universe," tales, but Bryan Hill's writing gives it some extra oomph that elevates it to something special in having his hero--Michael Cray--possibly be the worst monster of all. Artist N. Steven Harris provides stellar artwork as well, with a style that is a little scratchy in a way that makes the kinetic moments of action really pop. For a barely-discussed little spin-off maxi-series this was one stellar comic, and Bryan Hill has been continuing to prove he is a talent to be reckoned with on books like this or the currently being released (and quite impressive) new Vertigo series, "American Carnage." Keep an eye on Bryan Hill, he's only getting better and better. 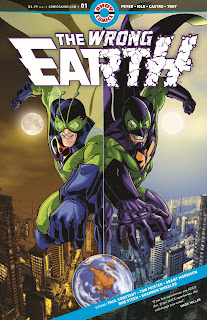 The Wrong Earth
Earlier in the previous week I discussed how much I love Jamal Igle's work on, "The Wrong Earth," and his artistic contributions are one major reason I love this mini-series. That said, the overall concept of a campy comic-world's hero switching places with the protagonist of a grim-and-gritty Universe is solid, and the writing of Tom Peyer is pitch-perfect in its satirical take on how as a society we seem to constantly mold and alter our favorite heroes to fit current societal tastes. It is clever, funny, and just the right mixture of critical and heartfelt. For the first comic to be released by new publisher, Ahoy Comics, they are coming out of the gate strong.
Posted by David Charles Bitterbaum at 10:43 AM