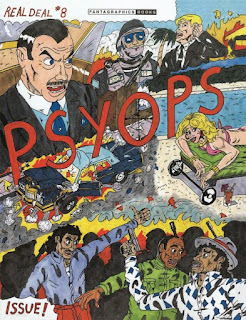 In June I discussed the hardcover collection of, "Real Deal Comix," that was released by Fantagraphics as well as the 8th issue of the series, which was also released by Fantagraphics after how earlier issues were strictly a small-press affair. Created by Lawrence Hubbard (AKA, "Rawdog,") and H.P. McElwee (AKA R.D. Bone) in 1990 and published off-and-on since then (with Hubbard the main creative voice since McElwee's passing), "Real Deal Comix," is in essence a reflection of the complexities and difficulties of inner-city life boiled down to pure wild violence--"Urban Terror"--and has consistently been a clever mixture of satire and destruction.

The issue that came out this year introduced concepts of governmental forces conspiring to make people fight and hate each other instead of realizing the rich and powerful are turning folk upon one another.  The idea is introduced as a complex conspiracy theory, but at this point the overall gist of it is all too clearly realistic. Both ferociously graphic as well as viciously clever, "Real Deal Comix," is like a smack to the face of absurdity so over-the-top it starts making shockingly reasonable points. I look forward to whenever Hubbard is able to put out another issue as the variety of wild violence and sharp political commentary makes for a wild read.
Posted by David Charles Bitterbaum at 10:47 AM