"Jurassic League," Features the Justice League as Dinosaurs and That's So Silly it Could Work 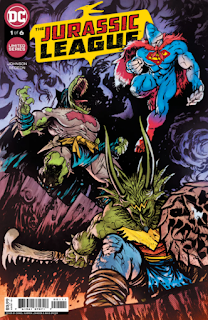 I'm a big fan of Daniel Warren Johson, considering his recent Beta Ray Bill comic to be among my favorite reads of 2021. I also have some familiarity with Juan Gedeon and know they've got great skills too. Apparently, these two gents are quite the mad scientists as they'll be bringing us, "Jurassic League," a take on the Justice League where they are all dinosaurs. That sounds so stupid and I love it.

I'm not sure what exactly the plot will entail besides turning the Justice League into dinosaurs, but there isn't too much I need to know as long as it will be silly and look cool! It seems, "Jurassic League," will be out in May and I look forward to it.