"JLA/Avengers," to Get a Limited Reprint For a Great Cause 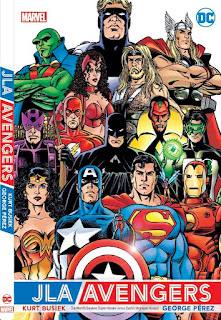 "JLA/Avengers," was a great mini-series written by Kurt Busiek and illustrated by George Perez. It also is the last time Marvel and DC officially crossed over way back in 2001. Since then there have been tons of acquisitions, changes, and so forth. It seems unlikely we'll ever see Marvel and DC cross-over again unless they at some point end up getting owned by the same company (in our current corporate dystopia that is possible). It also seemed very unlikely that the story would be collected again in a trade paperback due to the complex copyright rules. Well, something unexpected is happening, and it's good!

Yes, "JLA/Avengers," is getting a limited reprint. There will be 7,000 copies that stores can order (so allocations will almost surely occur). It is happening through the nonprofit known as the Hero Initiative. They are a, "...charity dedicated to helping comic book creators in medical or financial need. With only 7000 copies being printed, Hero Initiative is honoring one of George Perez's seminal bodies of work and his long-time support of Hero." It is saddening that one major reason it seems Marvel and DC were willing to let this be reprinted is that Mr. Perez has disclosed he has a limited time left with us. I suppose because this is for charity (all profits will be going to the Hero Initiative) the companies were okay with having this reprint happen and it has Mr. Perez quite happy. The only negative here is that the copies are limited, but I hope all the books find great homes!