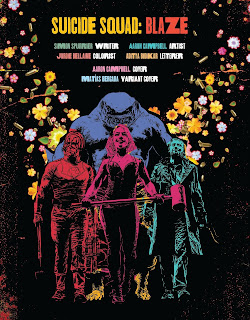 The debut issue of, "Suicide Squad: Blaze," is a fantastic new title from DC. It is part of the Black Label, meaning it is out of regular continuity and can be more violent/sweary/etc. It is written by Si Spurrier, a writer whose stuff I am a big fan of. He wrote one of my favorite X-Men series in the form of, "Legion," plus tons of other cool stuff. The comic is illustrated by Aaron Campbell who has done a variety of comics but I recognize for the incredibly creepy, "Infidel," from Image Comics.

"Blaze," as I will call it for short, focuses on a variety of convicts who sign-up for an experimental Government program that will give them superpowers but also kill them in three months or less. These new characters then work with members of the ubiquitous Suicide Squad to help take down a new superhuman who has been causing a lot of trouble. Seemingly capable of Superman-level powers this person is operating on little more than a primal instinct to rip apart and eat people around 3 times a day. As is pointed out in one clever moment, this isn't that big a body count compared to a superhuman who could blow up a city, but the optics are the issue. If some super-person isn't trying to do something based in society--robbing a bank for money, threatening terrorism for political gain--and is instead behaving more like a wild animal, that's scary to people who look at superpowered folks as humans with gifts as opposed to violent forces of nature. 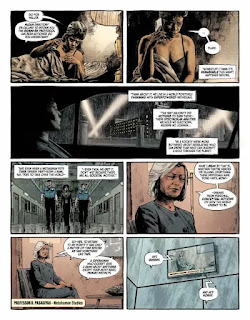 Spurrier brings insight and plenty of humor while Campbell provides fantastic artwork. His King Shark is massive and scary, his Harley looks demented, and Amanda Waller (the head of the Suicide Squad) is sufficiently imposing and scary. When a moment calls for some impressive imagery of things blowing up or bloodshed then Campbell provides that as well. The extra-large size of the comic (it is physically bigger like a treasury edition and has more pages than a regular issue) really lets Campbell's art breathe and impress.

"Suicide Squad: Blaze," #1 is a fantastic debut issue of this mini-series from Spurrier and Campbell. I really look forward to the mystery of this cannibal-style superhuman being further unwound and witnessing what other fantastic artwork Campbell will provide. Definitely worth picking up.