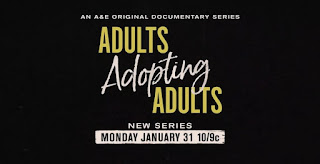 TLC normally is home to some of the strangest and wild reality shows (as I've often discussed), but A&E is throwing its hat into the ring for, "Craziest program," with their series, "Adults Adopting Adults." It's one of the hottest messes I've ever witnessed.

There have been times in history adults turned to adoption as a legal workaround, such as same-sex couples that couldn't legally marry using adoption to find a way to share estates and make medical decisions for one another. This show isn't about that. There are times when people who were basically raised from childhood by someone else are then adopted as adults to make things official in the eyes of the law. This show has a tiny bit of that with two sisters ( Tawny and Felicia) being adopted as adults. Everyone else is a situation that either is a little odd but kind of makes sense or the whole thing is batshit insane.

As I mentioned a moment ago, Tawny and Felicia are being adopted--by a couple named Jenny and Michael. They had the same Mom and two different dads. Due to parents being deceased or struggling with substance abuse at various points they ended up spending the majority of their childhood and teenage years with Jenny and Michael as parental figures. That all makes perfect sense. We also have Bianca who is being adopted by Derek and Carol. Bianca is a student who Carol has taught in college. Derek and Carol never had biological children, although Carol has a step-daughter with whom she has a strained relationship named Brittany. Bianca wants stability and they are happy to provide it to her. Not too odd a case, either. Then things get a bit stranger.

Frédéric Prinz von Anhalt is one of the last living members of a German monarchy (officially dissolved almost a century ago) and is famous for having been one of the husbands of Zsa Zsa Gábor. He wants a son to carry on the family lineage and run the royal trust and such which will be dissolved without a family member. Then we have a drama-filled situation with Kim and her future adoptive parents, Vickie and Joe. Kim hadn't spoken with her Mother (who adopted her from South Korea when she was an infant) in years when she began talking with Vickie and Joe about adopting her and serving as Grandparents to Kim's children as well. Kim's first Mom is back in the picture now, however, and this has resulted in a lot of mayhem. Then to top all this off we've got Danny. 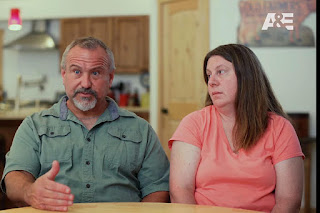 Not every person appears in each episode. Three episodes have aired and some folks have only popped up once. We still haven't even met one person being adopted. Danny and Christy with their adoptee, Illeana, have been in every episode. This is because their situation is bonkers. Illeana is a pregnant 20 year old whom Danny met online and insisted they adopt to help care for. Christy is hesitant about all this because Danny has cheated on her multiple times and is otherwise self-absorbed and only does what he wants when he wants it. Christy is going through Hell and Danny doesn't care, with Illeana basically stuck in the middle of this. It is abhorrent to witness and I hope Christy leaves him ASAP.

"Adults Adopting Adults," has stories that are informative and warm your heart as you watch and see people celebrate making their family bond legally official. Then it has some folks who just cause you to cringe as you watch the slow-motion trainwreck that is their lives. I've enjoyed the first three episodes and am curious to see which situations work out well and which seem to not so much conclude as they crash to the Earth like a fiery comet of bad decisions.