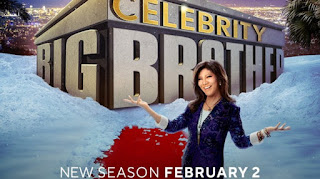 I am outspoken about my love of wild reality television shows and, "Big Brother," is a great one. The United States version of the celebrity edition can be as hit-or-miss as the regular series, however. Sometimes we get some fun contestants who are a hoot to witness or play the game expertly. Other times we get a big bucket of bland. This is the third time a celebrity edition of the show is happening (at least in America, it has happened a lot in other countries) and cast looks okay. You can see it here and note it is a lot of vaguely-known actors, some sports stars, and a chunk of reality mainstays. There is not a random minor political figure desperate for relevance this year and I am happy about that.

"Celebrity Big Brother," always goes a lot faster than a normal season and from what I've read this edition starts tomorrow (the 2nd) and wraps the 23rd. Short and hopefully sweet. I don't have anyone specific I'm cheering for, but I will say met Chris Kattan at a Wizard World once and he was perfectly pleasant. Also, Carson Kressley is hilarious on anything he appears in so that'll be fun too at least.