The Super Bowl LVI Halftime Show Was a Treat 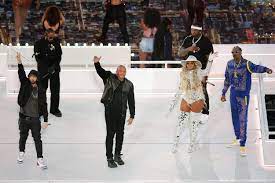 Update 2/14/22: It has been brought to attention that was indeed Anderson .Paak on the drums as well. Very cool!

I'm not a huge football fan, but I almost always watch the Super Bowl to enjoy some fun ads and see what kind of spectacle the halftime show turns out to be--sometimes for better and sometimes for worse. When the lineup for this show was announced I was pumped. The kiddos in GenZ maybe didn't get what the big deal was but us Millenials, the GenXers and cool Baby Boomers (like my Mom) were all excited. I mean, in alphabetical order we had: Dr. Dre, Eminem, Kendrick Lamar, Mary J. Blige, and Snoop Dogg sounded like some quality rap and R&B from some GOAT artists and one of the few new ones I really dig (Lamar). Then the show happened and it delivered the goods along with giving us a surprise appearance from 50 Cent as some icing on the cake.

It was fun, well-choreographed, and had a bunch of songs that took me right back to my Junior High years. There ain't nothing wrong with a little nostalgia, and this halftime spectacle illustrated that beautifully. Now we just need Dr. Dre to release a new album considering that, "Detox," is basically forever shelved. Oh, and the actual football game was fun too, although I was hoping for the Bengals to win basically out of spite for the Rams. It goes back to how they treated Saint Louis some years ago (when they abandoned the city), but that's a whole digression we don't need to go into. The halftime show was where the fun was at, for sure.