A New, "Thunderbolts," Comic is Coming and it Looks Fun! 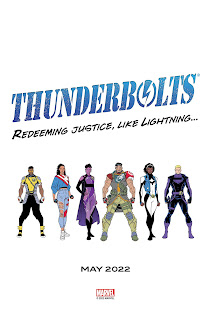 True story: Thursday  I was having lunch with a friend and while we chatted about comics I mentioned it had been a while since a, "Thunderbolts," comic was being released. We agreed it wouldn't be long until the series was revived because Marvel usually doesn't let a title (or most characters) stay dead for long. Later that day a teaser was released for a new, "Thunderbolts," and when I messaged my friend about it we laughed. Today, all the details were revealed and it does look pretty snazzy.

Spinning out of that, "Devil's Reign," event that is going on, the latest, "Thunderbolts," series will be written by Jim Zub and have art by Sean Izaakse. Zub actually has a solid previous run on, "Thunderbolts," and while I am not very familiar with Izaakse, what I've seen of their work looks good. Hawkeye is leading the team (so it's a little reminiscent of the West Coast Avengers in that way), and other characters I enjoy are present too such as Monica Rambeau (who has had many nicknames), America Chavez AKA Miss America, Persuasion, Power Man (the younger iteration, not Luke Cage), and plus a new character with the admittedly silly name Gutsen Glory. 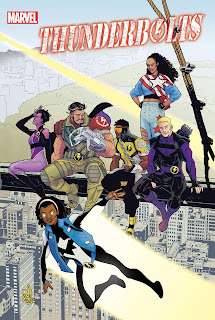 I've seen some irritation online that the team isn't villainous (the original incarnation of the Thunderbolts were baddies pretending to be heroes), but that version of the team was just the debut and many versions have been quite different since then--so I'm fine with it. I'm just excited to see a writer I enjoy, an artist whose stuff looks good, and characters I like all present for my reading pleasure in this newest series.