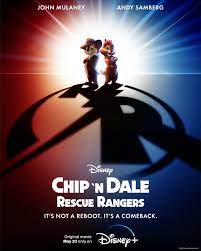 There is going to be a new, "Chip and Dale," movie. It is going to stream on Disney+ and has the talents of John Mulaney as well as Andy Samberg and the Lonely Island crew. It actually looks pretty clever and dare I say good? It has a really meta vibe where, "Rescue Rangers," was a show but the characters live in the, "Real," World in a manner where this almost seems like a stealth sequel to, "Who Framed Roger Rabbit," more than a Chip and Dale movie--but I ain't mad about it. Give the trailer a watch to see what I mean:

It looks fun, right? There is some nostalgia and there are pop-culture references but it isn't spoon-feeding us references nonstop and seems to have an actual story to tell beyond shout-outs to other properties (although those are fun too). I'm optimistic that this could actually be quite entertaining. We'll know for sure when it comes to Disney+ on May 20th.