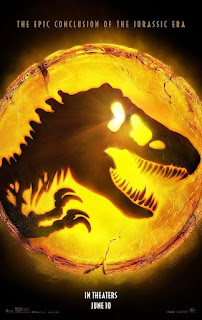 "Jurassic World: Dominion," is the third, "Jurassic World," movie, and the sixth, "Jurassic Park," flick if you count them as one big six-movie arch. I really liked, "Jurassic World," and found, "Fallen Kingdom," to be good even if it felt like two different flicks smashed together--a return to the island movie and then a monster movie with a big raptor instead of a monster in a mansion. At the end of that movie, a bunch of Dinosaurs escaped into the wild to breed, thrive (etc.), and now it's essentially Human Vs Dino. Give the trailer a look:

I'll admit seeing so many of the OG cast gives me a nostalgic rush. I mean, "Jurassic Park," is one of my favorite movies ever (and I enjoy many of the hit-or-miss sequels), and seeing Sam Neil, Laura Dern, plus Jeff Goldblum is rad. We just need Samuel L. Jackson's character to somehow not be dead (maybe he's simply missing that arm) or Wayne Knight's character to also have survived against all odds (perhaps the Dilophosauruses just nibbled him) and that would rock. As long as this is better than, "Jurassic Park III," I think I'll enjoy this, "Conclusion," to the franchise even if it obviously is going to have more movies though I don't know where things can go now that we've taken the Dinosaurs out of the park and into the rest of society. Wait! I'm calling it now, before long we will have space travel involved! "Jurassic Space Park," by 2025 or bust!