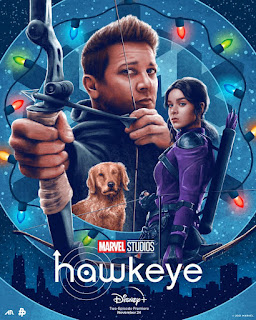 The first two episodes of, "Hawkeye," stream starting tomorrow. I've previously discussed how I am looking forward to the, "Hawkeye," show thanks to all the great talent involved and not really because of Hawkeye himself. No offense to Jeremy Renner as he is a great actor, it is just that Hawkeye has been jokingly referred to as, "Everyone's least-favorite Avenger," for a reason. I'm just saying what many of us are thinking. I've seen some positive early reviews of the first two episodes (that was all critics were provided) and they state how Hailee Steinfeld is awesome (she is a great actress and singer, I don't know if she'll sing in this though) and Renner is present. I look forward to watching the show and seeing other characters that have definitely or seemingly been confirmed to appear, such as Alaqua Cox's Echo and Florence Pugh's Black Widow.

I'm not surprised the show is good if it's drawing from the amazing run by Matt Fraction and David Aja (with some other guest artists too). I really hope Disney/Marvel is paying some thank-you money to both in adequate amounts. I look forward to watching this over the extended Thanksgiving weekend!