I Enjoyed this, "DC Super Heroes: Lex Luthor's Puzzles," Book Even if I Stink at Puzzles 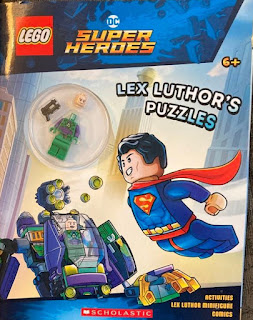 Whether you're a child or an adult with a child you've gotta admit book fairs at school are fun. Should you be a youth buying goodies for yourself or the parent with a kiddo pumped to shop, I love a good book fair. We were able to get some awesome stuff from one recently, including some, "Pete the Cat," titles for Clarkson and I bought a book titled, "DC Super Heroes: Lex Luthor's Puzzles." It came with a free Lego figure and I know I am not the best at puzzles so I figured a publication geared toward children would contain puzzles I might be able to tackle.

Okay, I could easily do half the puzzles and really struggled with the other half, so yah? I was easily able to count-up bats and the color-identification puzzles we not too bad.  I struggled with some of the mazes and pattern stuff though. I eventually got through the puzzles, however. I also enjoyed the comics in the book that featured Lego-versions of the heroes preventing Lex Luthor's evil plans to take over the World.

"DC Super Heroes: Lex Luthor's Puzzles," is a fun book full of puzzles, some cute stories, and you get a free Lex Luthor figurine with it too, so that's a nice bonus. If you've got a child or are looking to sharpen up your own mediocre puzzle skills (no judgment) then I'd recommend checking this book out.