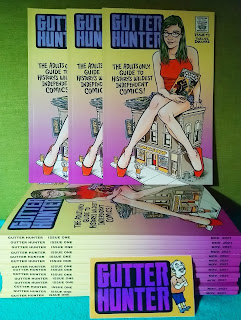 I have previously written about how I was a big fan of the 'zine, "Cinema Sewer." Dedicated to discussing all kinds of weird and fascinating movies, I actually was honored to contribute an article for what turned out to be the final issue, #34. Recently, Robin revealed that since concluding, "Cinema Sewer," he had been working on a new project, "Gutter Hunter." This new 'zine was dedicated to exploring the history of weird indie and underground comix--yes, with an X when we're talking about the underground goodness. I ordered a copy of the first issue quickly after he revealed what he'd made and I'm glad I did as it sold out! Robin shared on Facebook and Twitter how that had never happened before, and within a week he was all out of, "Gutter Hunter." Thankfully, a second printing is on the way for those who want to witness, "Gutter Hunter," because my copy just arrived in the mail yesterday and it is amazing.

Bougie has always been a fantastic writer and one of the most knowledgeable people I know about movies. We've talked comics before over the interwebs and his breadth of knowledge when it comes to the comic artform astounded me too. I'm not surprised he made a 'zine dedicated to indie and underground comics, but I'm overjoyed he did because this is a stupendous read! Whether talking about the erotic, "2 Hot Girls on a Hot Summer Night," the controversial, "White Whore Funnies," or telling us about the outright strange comics of a cult, "Gutter Hunter," is loaded with the history of comics that generally don't get the same attention as, "Mainstream," works. I loved the first issue and would encourage you to preorder its second printing at this link. Robin's gone from writing about the strangest movies around to the weirdest comics you'll ever find, and I'm most definitely here for it.