Diamond Comics is Having a Bad November

Diamond Comics used to be on top of the comic-book world. They basically had a monopoly on the distribution of comic-books/floppies themselves. Then, as I and others have chronicled, that iron fist crumbled into...iron ashes? I don't know, just roll it. Anyways, the pandemic hit, Diamond stopped distributing comics temporarily, DC used that as an excuse to launch their own distribution partners, then Marvel left Diamond for Penguin Random House, IDW plans to do the same, other publishers are working with Diamond still but also flirting with the other distribution options and--deep breath--it's a big ol' mess. Diamond has been struggling, and then things got worse this month.

Diamond kicked-off November by accidentally sending a retailer-exclusive cover of issue #2 of, "Primordial," to multiple comic shops. Considering, "Primordial," is an Image book and Image is the biggest publisher still with Diamond exclusively for their floppies, you'd think they wouldn't want to make them angry. That was bad, but then things got worse. Diamond's website a couple days ago quit working. Literally, it just didn't work/showed an error message. It turns out they were attacked by ransomware. In the month of Thanksgiving Diamond does not have much to be thankful for, clearly. Comic shipments will now be delayed as everything was shut down at Diamond for some time (thankfully, things seem to be up and running now). 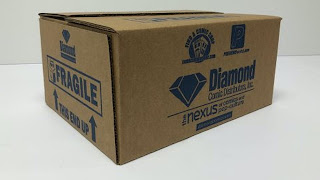 The thing that gets me about all this is why would someone target Diamond for a ransomware attack now while they're hurting? If you had the tech to do it why did you wait until 2021 as opposed to when they were on top of the market in 2019 or earlier? It's like bursting into one of the last remaining Kmarts and demanding everything in the register. You're going to get maybe three bucks and a half-eaten candy bar. I'm being a little dramatic as Diamond still makes plenty of money with their other divisions of toys/games/etc. but my point stands!