Television Tuesday: "Amish Mafia," Sure Was a Wild Show 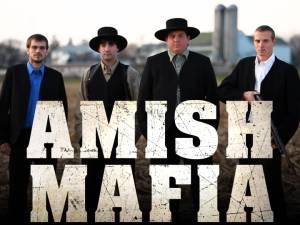 This post could fall under, "Television Tuesday," as I'm discussing a T.V. program or could honestly be a Flashback Friday as the show I'm talking about ran from 2012-2015 (which feels like forever ago). I am referring to what may be the strangest reality television program to ever air, "Amish Mafia." It was bizarre. We binged a lot of it over Thanksgiving weekend and my wife and I loved how strange a show we witnessed.

Depending on whom you ask, "Amish Mafia," was either completely fake, totally real, or a strange mixture of truth and fiction. It centered on people who ran an organization called, "Amish Aid," within the Amish community. It ostensibly was founded to help Amish folks in trouble so they could stay within their own community for assistance with everything from a broken buggy wheel, to a bad year for crops, setting up a Christmas tree stand, and so forth. However--if the show can be trusted at all--it slowly morphed into a group that helped keep the peace in the Amish community by having members who weren't fully baptized yet into the Amish faith being able to bend the rules the Amish follow. This results in shocking amounts of violence towards non-Amish (AKA, "English,") who threaten the Amish way of life along with conflicts among other Amish Aid organizations (which are basically other mobster groups). 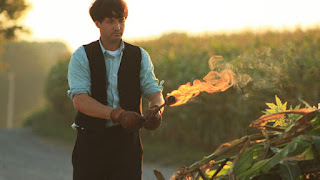 The show went for four seasons and people said it had to be fake. Some said real or fake it made the Amish look bad. Everyone involved in the show insisted it was real and they didn't fear non-Amish cops a sliver of the degree they feared the local bishop getting them shunned or exiled if they didn't keep the Amish community safe and well-funded. Countless websites like to debunk aspects of the show and insist it is all made up. In later seasons the show actually incorporates the disbelief of others, making the governor of Pennsylvania at the time and his crusade against the show a plot point. Muddying things further, actual arrests and jail time some cast members went through for actual illegal activities gets discussed in the show, making things feel real sometimes even when other elements of the program really strain belief.

I am unsure how authentic anything was on, "Amish Mafia," but I'll be damned if it isn't entertaining. This could be a reality show that exposes a side of the Amish community few would suspect exists, it could be mostly fabricated but presented in a fun reality style that gives it an authentic feeling. All I know is I see all the evidence a lot of it was fake but I still want it to mostly be real. The wild personalities, the shocking amount of explosions (where do they get these explosives?), and violence, it all seems too surreal to exist in our world--almost like a hyperreality--but I loved watching it. 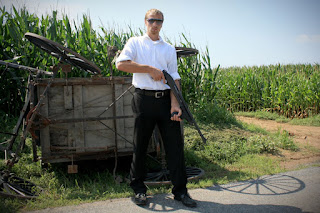 Real, fake, or somewhere in between, "Amish Mafia," is exciting, fun, engaging, and really captures your attention. The show may have ended more than a half-decade ago, but if it ever comes back in some form, I'll tune in for sure. As for now, you can stream all of, "Amish Mafia," on Discovery+, which is exactly what Samii and I did over the past extended weekend!