Lil Nas X Being on, "Maury," Today was Some Hilarious Cross-Promotion 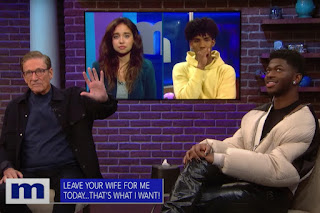 Lil Nas X is a great musician and he loves to just do funny stuff for the sake of fun. He is a bit of a professional troll, but he trolls haters and does silly stuff like appearing on, "Maury," for a fictional segment. His appearance--under his real name of Montero--is a bit of a continuation of his music video where he discovers a footballer boyfriend has a wife. Montero's real ex-boyfriend is in the segment (they are on good terms) with a faux-wife and questions about who the real father is. The segment features the aforementioned paternity test, proposals, lie detector results, and you know that Montero runs off into the backstage area in shock toward the end! As if to further the weird mix or real-and-fake, Lil Nas X bookended the show at the beginning and end with actual people with real drama in the middle of the show. Should you want to see just the Lil Nas X stuff, you can here though:

I admire how basically nobody broke character, besides a few grins at the silliest moments. "Maury," made sure to include the disclaimer that this segment was fictional, and I applaud Maury for being willing to do such a weird bit of cross-promotion with Lil Nas X (I assume Lil Nas X reached out with the idea as this seems like something crazy he would dream up). Plus, this was the first time I'd watched, "Maury," in forever (I was always more of a, "Jerry Springer," fan), so mission accomplished in getting Mr. Povich more viewers and getting Lil Nas X some promo.